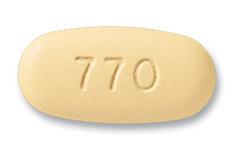 FDA approved for use in HIV/HCV co-infection
Genotype

One tablet once daily with or without food. Each tablet contains 100 mg of grazoprevir and 50 mg of elbasvir. Ribavirin may be added in patients with certain baseline NS5A polymorphisms (mutations that may make the Zepatier less effective).

Zepatier can be used in severe renal impairment, including in patients on hemodialysis. NS3/4A protease inhibitors, such as grazoprevir, are contraindicated in patients with moderate or severe liver impairment (Child-Pugh B/C), which is also called decompensated cirrhosis. Using Zepatier in decompensated cirrhosis may cause significantly higher amounts of grazoprevir in the blood and may increase ALT (liver enzyme).

Before starting treatment with any direct-acting antiviral (DAA), including Zepatier, patients should take a blood test to check for hepatitis B (HBV) infection. HBV infection could get worse or reactivate during or after DAA treatment, potentially leading to serious liver problems, including liver failure or death. Patients with current or past HBV infection should be monitored during HCV DAA treatment, and some may need to take HBV treatment. See HBV Reactivation for more information and consult your medical provider.

Zepatier is very well tolerated with minimal side effects. In clinical trials, very few people —around 1%— discontinued treatment due to side effects. The most commonly reported side effects are fatigue and headaches. These side effects are considered mild and are comparable in patients with and without cirrhosis. Nausea, insomnia, and diarrhea have also been reported. Zepatier has not been studied in pregnant women or nursing mothers, so the impact it may have on fetal development or nursing babies is unknown.

Pregnant women or women who are trying to become pregnant should avoid use if the addition of ribavirin is required.

Before starting Zepatier, be sure to tell your medical provider or pharmacist about all of the medications, supplements, and herbal products you take, whether they are prescribed, over-the-counter, or illicit. It is also important to inform them of any changes as they happen during treatment. Zepatier should not be taken with HIV medications that require a booster (meaning they require another medication such as ritonavir or cobicistat to increase the drug levels in the body), such as atazanavir, darunavir, or elvitegravir. Zepatier should also not be taken with the HIV medications efavirenz or etravirine. Use with certain statins (cholesterol medicine) may cause increased risk of muscle pain (myopathy) or muscle breakdown (rhabdomyolysis). Your doctor should decide if your statin should be continued or changed during treatment with Zepatier. There are no interactions with methadone or other common medications used for opioid, alcohol, or nicotine dependency. Unlike several of the other HCV medications, Zepatier does not interact with acid reducing agents. It should not be taken with the rifamycin antimicrobials, such as rifabutin, rifampin, or rifapentine, nor should it be taken with the anticonvulsants carbamazepine, phenytoin, phenobarbital, or oxcarbazepine. It cannot be taken with St. John’s wort, and in general, herbal products should be avoided due to lack of information regarding potential for interaction.

Zepatier was an excellent medication upon its release, but it is not used much any longer as the other newer DAAs are preferred. Of particular importance: This regimen is especially effective in patients with kidney disease, including those on hemodialysis, with 99% achieving an SVR12.

This regimen was studied in a number of unique patient populations including HIV/HCV co-infection and significant renal impairment, including hemodialysis. The C-EDGE COINFECTION study showed minimal side effects in HIV/HCV co-infected patients who were given Zepatier and it did not negatively impact their HIV viral suppression. The C-SURFER study showed that Zepatier is well tolerated in Stage 4 and Stage 5 chronic kidney disease, and less than 1% discontinued treatment due to side effects. Both of these groups have high rates of SVR12 making it a good option in these patient populations. If you have HCV genotype 1a, you will need to take an HCV drug resistance test before starting Zepatier. If your hepatitis C virus is resistant, you will have to add ribavirin and take the combination for an additional four weeks (16 weeks total). This improves its effectiveness and allows the medication to overcome resistance, dramatically improving your chances for cure.

Testing for baseline NS5A polymorphisms is not required for genotype 1b or in patients on hemodialysis.

Ribavirin dosing is weight-based: 1,000 mg daily if less than 165 pounds (75 kg); 1,200 mg daily if greater than or equal to 165 pounds (adjust for renal dysfunction or lab abnormalities). Administer in 2 divided doses daily with food.