A heartfelt message from the creator of PrEP Facts: Rethinking HIV Prevention and Sex

“Why can’t people just use condoms?”

As a PrEP educator and psychotherapist, this is the reaction I receive most consistently when I explain the benefits of using pre-exposure prophylaxis (PrEP) to prevent HIV. There is an implicit notion that gay and bisexual men “should” use condoms to prevent HIV, to decrease disease, to take responsibility for one’s health. However, the proponents of this argument constantly ignore one tiny flaw in their logic: Skin-to-skin sex feels better for most people.

During this time I was also getting my undergraduate degree in psychology. However, nothing in academia encouraged or rewarded using education and activism to improve mental health. It seemed incongruent, if not unethical, for me to be living in one of the areas hit hardest by the AIDS epidemic and not be actively involved in the solution. How could I truly serve my community’s emotional needs if I wasn’t doing something to resolve the source of so much trauma and anguish? It was time to get active.

DESPITE THE OVERWHELMING EVIDENCE demonstrating PrEP's effectiveness in individuals who took it daily during the groundbreaking iPrEX study, people were not learning about this essential new strategy.

By 1992, we had a very clear understanding of how HIV was spread, and how condoms could prevent transmissions. The exact stats were always sketchy, but my early training taught they were “about 98%” effective if used consistently and correctly. With that in mind, I began volunteering for an organization that was running a “100%” campaign, handing out condoms, lube, pins, and pamphlets, on street corners and in bars, that said “100%”. The intention of this marketing tool was to let people know that if everyone used condoms 100% of the time—everyone who is HIV-positive, everyone who is HIV-negative, everyone who is having sex at all—then we would eradicate this epidemic by the year 2000. We had people wear the shirts and pins as a sign of their commitment to 100% condom use. It made perfect sense.

But what happened? People didn’t use condoms consistently. Even back during the darkest day of this epidemic, when the consequences of not using condoms were potentially an excruciatingly painful death, people didn’t use condoms consistently. Moreover, one by one, many of my colleagues, co-workers, lovers, roommates, and friends became newly HIV-positive. So much for ending HIV by the new millennium.

I had an opportunity to ask a good friend about this many years later. I wondered to him, “Was getting HIV the result of a condom breaking? Was there an accident? We always talked about condom use, so how did this happen?” My friend, who is still very healthy today, told me, “Actually, Damon, I wasn’t using condoms consistently. I understood what the risks were, and I was embarrassed to tell you because I knew you were right about that. But regardless of the facts, I wasn’t using condoms 100% and was too ashamed to talk about how much better sex felt without them.” 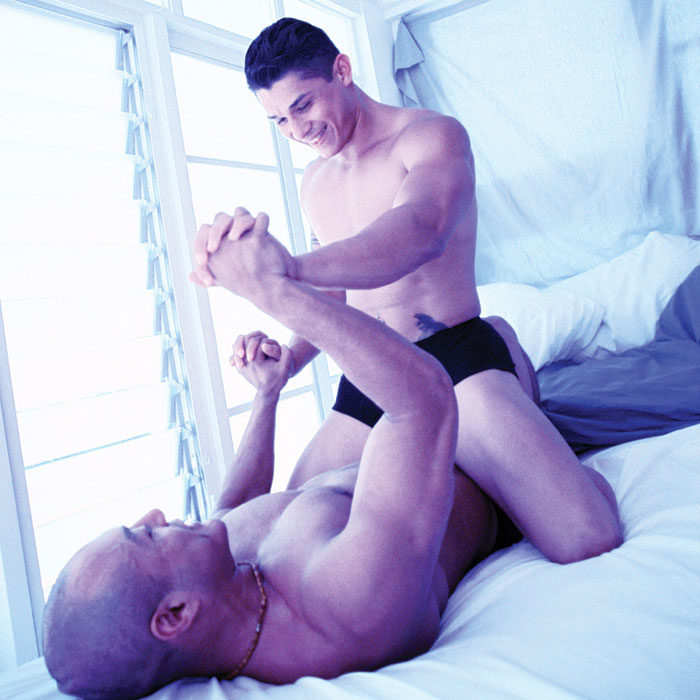 That was a difficult conversation to have. It forced me to understand how all my frantic efforts to get everyone in the community to use a condom 100% inadvertently shamed and alienated the individuals who weren’t following suit. It made me realize that I wasn’t someone my friends could trust with these pleasurable yet terrifying experiences. It revealed to me the limitations of a rigid HIV prevention strategy that reflected a medical ideal while ignoring complicated feelings of ambivalence, confusion, and hunger to share another man’s body without barriers.

Over the next decade, new HIV rates in the U.S. remained consistent, at about 50,000 per year, with no significant rises or decreases. So in 2011, when I began learning about a daily pill called Truvada that can prevent HIV by up to 99% when used daily, I had to seriously take pause. Could this finally be the key to bringing down new infection rates after a decade of stagnation? I decided that for myself this would be the ideal strategy for remaining HIV-negative after 22 years of being sexually active and constantly worrying if and when and how I would someday become HIV-positive. For these reasons, I began using Truvada as PrEP on a daily basis on July 19, 2011.

However, despite the overwhelming evidence demonstrating PrEP’s effectiveness in individuals who took it daily during the groundbreaking iPrEx study (not one single infection with daily use), people were not learning about this essential new strategy.

Initially, I attributed the dearth of media coverage and community dialogue to the fact that the Food and Drug Administration (FDA) had yet to approve its use. I figured that on the day the FDA approved PrEP people would swarm the streets of Manhattan in jubilation, much like they did when Marriage Equality passed in New York the year before.

Not so much. The FDA approved Truvada as PrEP as the first, and to date only, HIV prevention strategy (nope, condoms were never FDA approved) on July 16, 2012. I waited for the confetti, the glitter, the triumphant shouts of joy, or at least someone who was happy about this. Instead, nothing. There were no major announcements, community events, pride parties, organizational forums, subway ads, street rallies, bar crawls, nor mainstream communications that heralded this new era of hope. It wasn’t until two years later, after the Centers for Disease Control (CDC) and the World Health Organization (WHO) both endorsed PrEP, that it seemed people started learning about it, talking about it, and making rational decisions about their own use.

Meanwhile, there are those who maintain that “condoms only” is still the best way to prevent HIV. They wish to ignore history, human nature, medical advances, pleasurable choices. They believe that if we continue to beat the drum of “condoms, condoms, condoms” that somehow people will wake up and use condoms more in 2015 than they did in 1992.

I learned from my failures in the ’90s the most important lessons of my career: Listen to what people are telling you with their words and their actions. People want to experience the maximal pleasure, with the minimal consequences. They want to have more connection, with fewer barriers. They want to feel heightened physical sensations, with lowered medical risks. Why not support individuals of all HIV statuses in discovering the most proactive, responsible, empowered, and healthy means of experiencing pleasure as possible?

DAMON L. JACOBS has been working in HIV prevention education since 1991, and has been a Licensed Marriage and Family Therapist since 2003. His “PrEParing for P.L.E.A.S.U.R.E.” presentation has now been seen throughout the state of New York, as well as the 2015 Conference on Retroviruses and Opportunistic Infections (CROI), and the 2015 European AIDS Treatment Group (EATG) conference. He has appeared on MSNBC, New York WPIX, Al Jazeera America, NPR, and The Huffington Post Live, as well as in The New York Times, USA Today, and Out magazine.

EDITOR'S NOTE: The Truvada for PrEP drug label states that it should be used in addition to condoms, while at the same time stating that one of the populations indicated for PrEP use is people at high-risk who use condoms inconsistently or not at all. Moreoever, data from the CDC indicate that the effectiveness of consistent use of condoms for HIV prevention is 70% among gay and other men who have sex with men. Also, although iPrEx estimated a 99% efficacy with Truvada PrEP for those who took the drug every day, the more widely accepted figure for the high end is 96% reduction in HIV infections with four tablets a week. See PA Associate Editor Enid Vázquez’s blog, Tell It To Enid, for a one-on-one discussion with Damon L. Jacobs.

Why I Ride
What About Condoms?