Not your basic bodega

Buffalo is having a moment. Buffalo is experiencing a renaissance. The second largest city in New York State is thriving thanks to public and private investments that are creating both new places to live and vibrant tourist destinations (such as Canalside, located at the 1825 terminus of the Erie Canal, which now has new restaurants and bars). Also thriving in Buffalo is perhaps the world’s most unusual and dynamic hepatitis C (HCV) clinic: The Hepatology Clinic at the Erie County Medical Center (ECMC), otherwise known as La Bodega. 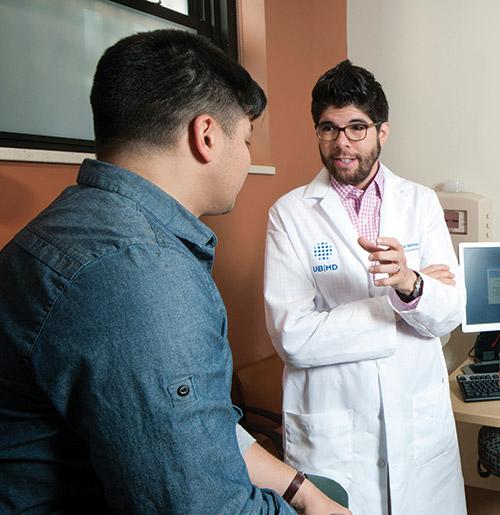 Founded in 2012 by Anthony “Tony” Martinez, MD, AAHIVS (HIV specialist), La Bodega is a community clinic that puts the needs of the community first. A medical doctor with the heart and soul of an activist, Tony moved to Buffalo from San Diego (although he is originally from Providence, Rhode Island) with a mission: “to help build the program and also contribute to the city’s revitalization—which was a once-in-a-lifetime opportunity.” Initially, “the clinic didn’t have a space, still had paper charts, and didn’t even have staff.” ECMC offered Tony a space that used to be an orthopedic clinic. At the time, it was “a rag-tag forgotten area—like a bullpen with staff in the center and rooms all around. And the front window has a metal gate, just like you would see in a bodega in New York City.”

Just like that, La Bodega earned its name. But instead of selling beer, cigarettes, and off-brand soda, this progressive Bodega follows a co-localized model and treats addiction and HCV simultaneously. Patients receive opioid substitution therapy (OST) at the same time as HCV treatment—no more draconian rules demanding that patients be clean and sober in order to save their livers and their lives. La Bodega has an astonishingly high HCV cure rate of 98.6%. “I was fortunately given a ton of freedom to build [La Bodega],” Tony says.

In addition to the bullpen vibe, La Bodega has a bell mounted on the wall that patients ring (loudly and proudly) once they are cured of HCV. (One patient rang it with such gusto, she pulled the triangle bell off the wall. It was replaced with a much more durable cowbell.) When that happens, everyone at the clinic comes out, claps and cheers for them. There is also space on the wall for patients to write their name and a message to the clinic staff and the world. Two large signs proclaim: “Come one, come all” and “La Bodega: Pirate Ships Don’t Sink.”

Patients are seen no matter if they walk in for the first time without an appointment or show up on the wrong day or time. Others are seen the same day that they are referred. La Bodega is staffed leanly but effectively and depends heavily upon their social worker. No one is hired if they don’t embrace the clinic’s core philosophy: “We live and die with our patients.” The staff must have the same patient-centric philosophy and also agree to be on call 24/7 via cell phone, should a patient ever need help. “We are always on call,” says Tony. “Patients need access to you. If they have that access, they feel more comfortable. If someone runs out of Suboxone on a Sunday, they can reach out to us.” This is not your average clinic.

Tony has worked in addiction, HCV, and HIV for 18 years. “Liver disease and addiction are married to each other and they eventually merged in my career.” He was treating a patient at La Bodega who was co-infected with HIV and HCV. The patient asked Tony if he could be his HIV specialist. “I then had to figure out how to add more to what I’m already doing. What do I have to do to become a specialist?” When he looked into AAHIVS—certification as an American Academy of HIV Medicine Specialist—he realized that he already met all of the training criteria, and was allowed to sit for the board exam and could add AAHIVS to his title after passing it. Tony remains the patient’s HIV specialist to this day.

“Tony Martinez is one of my true ‘Hep C heroes’,” says Brian Risley, chair of the Hepatitis C Task Force and Manager of HIV/Hepatitis C Health Promotion at APLA Health in Los Angeles. “Tony knocked it out of the park when he spoke about his bodega clinic concept at the 16th Annual Hepatitis C Summit. La Bodega has created a family of providers and patients where successful treatment of HCV and addiction are as important as their life stories and successes. What Tony presented was a model for clinics everywhere to successfully treat each person’s HCV and addiction holistically and empathetically.”

And this model is being replicated in several states—California, Louisiana, Nevada, Texas, and Washington. Additionally, Tony has had discussions with health officials in Portugal and Saudi Arabia about assisting with HCV elimination plans in those countries.

Like all health care facilities, La Bodega had to make adjustments when the coronavirus pandemic hit the U.S. hard in March. While some patients had to be seen in person, La Bodega needed to convert to telemedicine—and quickly. During that “painful week,” Tony’s staff had to call every patient and convert their care to telemedicine. Some patients were technologically savvy enough to use the Zoom video conferencing platform, while others weren’t, and Tony wanted options for all. “I wanted different platforms to let the patients choose what works for them and choose their scheduling. We had to make scheduling forgiving. Like our clinic model, one size does not fit all.”

In an effort to facilitate easier patient communication, Tony and one of his staff members paid for their own subscriptions to various telemedicine services for their patients to use. Thanks to their nimble shift to telemedicine, La Bodega has seen 51 new HCV patients since March, and 43 of them have started hep C treatment. Twenty-one new patients have started opioid substitution therapy. The clinic has had 1,223 total patient visits since March 13, an astounding number.

On June 5, New York Governor Andrew Cuomo announced that the state had reached its lowest number of deaths and hospitalizations since the coronavirus epidemic started. As the state slowly reopens Tony continues to worry and “hopes it’s not just COVID half-time. We can’t sustain another round of this. We’ve got to flatten this thing out enough so that we can get ahead of it.” And La Bodega’s new challenge is that most patients really like telemedicine. “How do we integrate telemedicine as another communication tool while still maintaining that close, human interaction?”

Meanwhile, La Bodega is receiving national and international recognition. The team submitted numerous abstracts to last year’s annual Liver Meeting of the American Association for the Study of Liver Diseases (AASLD) in Boston. One of the abstracts was included in the presidential plenary HCV wrap-up session (arguably the session with the most impactful abstracts). La Bodega’s model was also presented last year at the International Conference on Hepatitis Care in Substance Users in Montreal. And this year, Tony presented at the International Hepatology Exchange in Amsterdam.

When he started his career, the majority of HCV patients were male baby boomers. Now, due to the opioid epidemic that has seeped into every state in the U.S., most of his patients are “frighteningly young,” under the age of 30, and half are women. His female patients are of childbearing potential, and they can and do get pregnant. Babies are being born with HCV at the ever-growing rate of 6% (in comparison, HIV vertical transmission rates are 2%). And this has forced Tony and his Bodega to evolve again. They now offer testing for children born to HCV-positive mothers whom they have treated. La Bodega, in collaboration with the ECMC’s Division of Family Medicine, also offers treatment to eligible children.

La Bodega, like the original stores in New York City, is “one-stop shopping” and open to all.

Michelle Simek has worked in HIV/AIDS for more than 20 years. She currently works at the UCLA Center for Clinical AIDS Research and Education (C.A.R.E.) and is a popular HIV/AIDS educational presenter, both locally and nationally. In her spare time, she is an actor, avid reader, enthusiastic concert-goer, and proud mom of Baxter, her rescue cat.

Like HIV, COVID-19 underscores disparities
Until we are all free
Not your basic bodega
Observations of an HIV doc