Second-line treatment recommendations
By Nicholas Paton, MD, of the National University of Singapore May 9, 2022 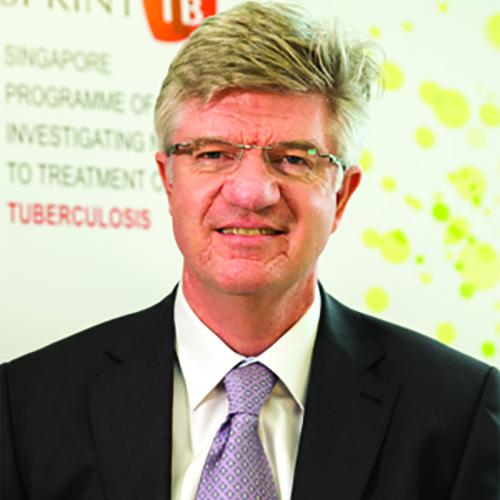 “We did the NADIA trial to address two major questions in the evidence base for the W.H.O.’s recommendations in the second-line treatment recommendations in the public health approach. Firstly, whether it’s optimal to give dolutegravir in second line when you’ve got extensive nucleoside resistance, and secondly, whether you need to switch people who are failing on a tenofovir-based regimen to zidovudine [AZT], which is what the W.H.O. has been recommending for the last 12 years, but it’s never been tested in a controlled trial.

“So we tested these two questions in a randomized controlled trial called NADIA. It was done in program settings in Uganda, Kenya, and Zimbabwe, and we made sure that the monitoring strategy was relevant to the public health approach, and essentially randomized people to each of those questions. So dolutegravir versus the best-in-class PI [protease inhibitor] darunavir, and then to stay on tenofovir or to switch to zidovudine. And there were four main findings, each of which has potential to have a big impact on the public health approach and beyond.

“The first finding was that dolutegravir works extremely well, even if it was paired with nucleosides which you would predict to have no activity because of cross-resistance. And this is important because it firstly supports the W.H.O. recommendation from 2018 that everybody should use dolutegravir second line, and that the evidence really wasn’t solid for that at the time, but also it supports this global program-wide switching from people who are stable on efavirenz to dolutegravir without viral load testing, which has been happening in many places and people have been concerned about the risk of background resistance, whether this would create a public health catastrophe. So our results are very supportive of these approaches.

“Sort of to counter that, the second major finding was that we found nine cases of emergent dolutegravir resistance, which may not sound like a lot, but it’s actually quite remarkable compared with what normally happens in first-line therapy, where you really hardly ever see dolutegravir resistance. So the significance is not clear. We’re not sure how this would play out in programs and individuals. But it’s an important thing to bear in mind and think about mitigation strategies for that.

“The third important finding was that darunavir, the PI, also did extremely well. So if you take dolutegravir now to be the gold standard, the best treatment actually, darunavir stood up to that standard and it’s the only PI that’s done that in recent trials and second-line therapy. And that’s important because currently darunavir sort of languishes in third place in the W.H.O. guidelines behind lopinavir and atazanavir, and really, it should be higher. And there’s now a generic formulation made by Hetero [Labs Ltd] of darunavir/ritonavir fixed-dose combination. The price has come right down to 210 U.S. dollars a year, so it’s probably time, and the evidence from this trial supports it, to move darunavir into sort of pride-of-place PI in the public health approach.

“And then lastly, and perhaps the most important and disruptive finding, was that we found that patients who stayed on tenofovir and did not switch to zidovudine did better in terms of viral load suppression and lower rates of rebound, and also less dolutegravir resistance. So this sort of longstanding mantra from W.H.O. that you must switch from your failing tenofovir in first-line onto zidovudine as a new drug—and it’s a basic principle in infectious diseases—is actually wrong. And W.H.O. needs to change those guidelines after 12 years, now that there’s some evidence that gives the right answer.

“And finally, it also tells us that resistance testing, which we as clinicians, we are perhaps over-interpreting these in vitro data largely. So you know, you’d expect a K65R [resistance mutation] to predict people to do very badly on tenofovir and do well on zidovudine. And that’s not the case. So I think it’s telling us that we need to have a bit more nuanced view of interpretation of resistance, and application in clinical practice in taking into account the entire context.”