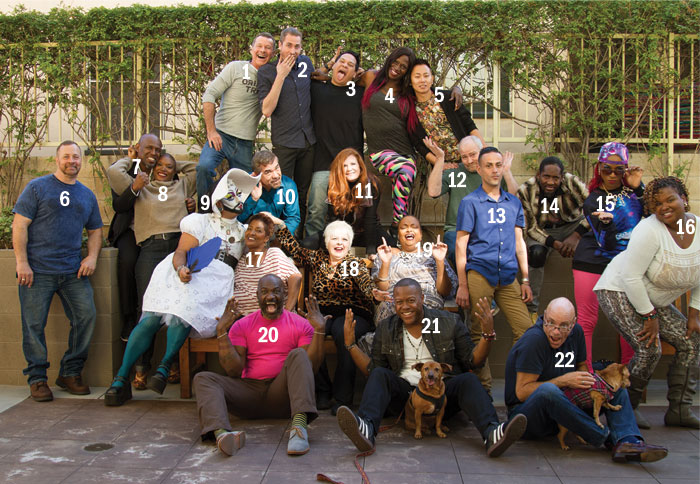 It seemed only appropriate that POSITIVELY AWARE would stage the photo shoot for its first foldout cover in Hollywood. Movies are bigger than life. The stories, the characters, the special effects—even the size of a movie screen—are all intended to take up your entire view. HIV can seem like that, too.

“When I found out I was HIV-positive, I thought I was going to die, because I was taught that this was punishment for being who I was,” said Sunkee Angel, a 28-year-old music artist HIV-positive since 2014. “There were days when my anxiety was so high, I couldn”t function. But things are getting better now. Thanks to treatment, I am undetectable and can still live a long life! I continue to pursue my career while also trying to break the stigma, shame, and guilt that can come with having HIV.”

Angel was among the 22 people living with HIV assembled for PA’s cover photo shoot, organized by Los Angeles-based photographer Louis “Kengi” Karr. The Saturday spent in front of Kengi’s camera turned into a sharing session of personal anecdotes and experiences of life with HIV.

“I’m old enough to remember friends who got sick when the crisis began in the early 1980s,” said Brian McCafferty, 52 and HIV-positive since 2005. “Young men lived only a couple of years after being diagnosed. I am starting my second decade being HIV-positive, and am in great health thanks to the medications now available.”

“Life was different 20–30 years ago,” said Sabel Samone-Loreca, a member of the Los Angeles County Commission on HIV. “I remember when AZT was the only drug available, and stigma was a way of life. I was somebody else back then. Today, at 48, I’m a strong Black trans-identifying woman, and a powerful representative of my community, working to make a difference for all transwomen and transmen of color.”

“When I was diagnosed with HIV, my life turned upside down,” said Sister Latina Turner, a member of the L.A. chapter of the Sisters of Perpetual Indulgence, who tested HIV-positive in 2015. “I tried to kill myself, but then found so much support and love within the HIV community that it made me stronger. I understand now that HIV is a disease; it’s not a death sentence.”

“Seventeen years ago when I was diagnosed, I didn’t think I was at risk for HIV,” said Precious A. Jackson, 44. “I was in total shock because I’m a straight Black woman who doesn’t have a drug history. Today, I’m a self-published author and I’ve been afforded several opportunities of a lifetime. HIV is a small part of who I am, and it doesn’t define me.”

“I was 16 weeks pregnant, and having pregnancy complications,” said La Vera Sanders, 42, HIV-positive since 2004. “Today, I am a marriage and family therapist, and am in my second year working toward a doctorate in forensic psychology.”

“I became infected while I was in China,” said Geath Yuma, a 24-year-old immigrant, HIV-positive since 2012. “It was during my last year of college. I went through a very miserable time, but then I chose to be strong, and I moved on. Although my first language is Chinese, I collected as much information as I could through English language websites. I learned that the earlier the better for starting treatment. However, the policy in China at that time was to provide medication only when a patient’s T-cell count dropped down below 200. I made a lot of effort to get the meds, and started treatment in February 2013.”

While education and information were important in reclaiming their lives, many who took part in the photo shoot discussed how they have come to serve as educators and as inspiration for others.

“Being HIV-positive is just one facet of my life, and it’s not a bad thing,” said Cathy Elliot, 51, HIV-positive since 1995. “People outside of the HIV community might not understand, but coping with HIV for all these years has made me resilient. I’m a better human being overall. I truly value the relationships that I have with my community, and I celebrate every day as a gift.”

“One cannot travel this journey alone,” said David Keesey, 61, who has been positive since 1991. Keesey has worked for the Foundation for AIDS Research (amfAR) and the Elizabeth Glaser Pediatric AIDS Foundation, and has continued to work as an activist and Reiki healer. “If not surrounded by my faith, pets, and lifelong friends who are family to me, I would not be here today. We all have a major role in making this world a brighter place by keeping our light in it.”

“When I was first diagnosed, I didn’t have time to feel sorry for myself,” said Jabari Mapinduzi Mwesi Chui, HIV-positive since 2010. “I said, Fuck this. I ain’t letting this shit kill me. I ain’t looked back since. I take life as it comes. People find it hard to believe that I am 50 years of cool, straight, and HIV-positive.”

Garry G. Bowie has been HIV-positive since 1983, and is executive director of Being Alive, a non-profit AIDS service organization in L.A. “I chose to work hard and focus on life so that I could live,” said Bowie. “When the HAART drug regimens became available in the late 1990s, I worked harder and then volunteered with AIDS organizations in Orange County and Long Beach. Today, I work in this field helping our community stay healthy and live, making organizations stronger and better, helping people find the better parts of themselves, forging a path to stay healthy.”

“When I found out I was HIV-positive, I was an out of work actor on my lunch break from Victoria’s Secret,” said Army Cachero, 38, who learned of his HIV status in 2002. Army maintains veggiearmy.com, a vegetarian blog. “My meth use had caught up with me. But in recovery, I have tools, support, and hope. Now, I’m grateful that I have been able to give back as a drug and alcohol counselor and public health educator. I still kept my passion as an entertainer. Being poz hasn’t kept me from acting in commercials, teaching Zumba, fighting for equal rights, or pursuing my dream of a vegetarian travel show. HIV shouldn’t keep anyone else from following their dreams either.”

“Living my life as an HIV-positive person has blessed me in more ways than I could have ever imagined,” said Corey Saucier, 39, a self-described starving artist who’s been HIV-positive since 2000. “It was the catalyst I needed to thrive.”
—RICK GUASCO

Spencer Cox
Knowing Where To Look
Life In Panorama