Several reports at this year’s CROI highlighted connections between hepatitis C and HIV. Considered the most important HIV medical conference in the world, CROI took place this year in March in Seattle. Go to croiconference.org to see abstracts (research summaries), poster presentations, and webcasts.

The majority of syphilis cases in the United States are found among gay men. The increasing number of cases being seen, however, are also found in women and in turn, their newborns. Congenital syphilis is now at a 20-year high.

A U.S. research team reported higher rates of syphilis in women living with HIV compared to the general population.

Looking specifically at records from a database of 4,795 women living with HIV, they found an annual syphilis rate of 760 cases per 100,000 person years. This compared to 2.3 cases per 100,000 women in the general population.

Although that sounds scary, the overwhelming majority of the positive women, 91%, had never acquired syphilis (3,999 of the 4,416 women who had ever tested for it). The total number of women with syphilis was 119, or 2.8% of those ever tested. A surveillance report presented separately at CROI, however, showed a 155% increase in syphilis in women living with HIV between 2013 and 2017.

Although the numbers may be small, the differences are big. The research team said there’s a need for a better understanding of risk factors in order to protect women and their infants. Also of concern is how subtle the symptoms of syphilis can be.

The researchers found that a history of hepatitis C was related to having had syphilis, along with previous use of intravenous drugs, later entry into HIV medical care, and being of black race.

“There appears to be a strong association between [injection drug use] and hepatitis C co-infection in this group of women that’s persistent over time—and IVDU rates are increasing,” said study presenter Jodie Dionne-Odom, of the University of Alabama at Birmingham.

CROI Vice Chair Sharon L. Hillier, PhD, of the University of Pittsburgh, said, “We have a resurgence of a pathogen that we thought we were going to see the end of in 2000 in the United States, and yet this year we have about a thousand cases of congenital syphilis in the U.S., which is astonishing when you think of it.”

CDC recommends that all pregnant women be screened for syphilis. The frequency of syphilis screening in HIV after entry to care, however, is not well established, said Dionne-Odom. She noted that approximately 6,000 women living with HIV in the U.S. give birth each year. Pregnancy data, however, were not part of this report.

In response to questions, Dionne-Odom said transactional sex (sex in exchange for cash or goods, including a place to sleep) appears to be the underlying mechanism for a connection between injection drug use and syphilis. “So it’s sex for drugs that either makes your partners at higher risk than you’d expect, or there are a higher number of partners. So it’s not the drug use itself. It’s the behaviors that come with the drug use. But as we have an increasing opioid epidemic and methamphetamine abuse that we’re all seeing in our clinic, it’s interesting to see this intersection between the drug use epidemic in the country and the syphilis epidemic in the country.”

Although 7% of the women reported having at least two sex partners in the previous six months (and this was found to be a greater risk for acquiring syphilis), 40% had not had a sex partner at all. Half reported 100% condom use and only 14% reported sex after using drugs or alcohol. Increases in STIs were seen in all women regardless of age. “So this is something that’s happening in older women as well,” said Dionne-Odom.

These risks are different from those found among men, she said, noting that the predictors of risk for syphilis in women needed to be understood in order to determine better prevention and screening for them.

All groups of women are affected by the drug and syphilis epidemics, with signs that the two are related.

“That said, since we know the rates are so high in women with HIV, we certainly need to be screening more frequently than we already are,” said Dionne-Odom. “The next step is if you have women coming into drug treatment programs, you screen them for syphilis. If you have women using drugs and are pregnant, they need to be screened at entry to care, at 28 weeks, and at delivery—all of them.”

Unrelated to hep C, but related to one of its well-known routes of transmission—injection drug use—researchers looked at opioid overdose deaths specifically in people with HIV epidemic.

“The opioid epidemic has been declared a nationwide public health emergency in the U.S.,” said study presenter Karin Bosh, of the CDC. “In the U.S. general population from 1999 to 2017, the rate of unintentional opioid overdose deaths increased about five-fold. This is fueled by changes in the drug supply [especially the introduction of fentanyl, a synthetic opioid that is 50 to 100 times stronger than morphine] and increases in the number of people using opioids. Our analysis sought to assess unintentional opioid overdose deaths specifically among persons with HIV because we know that people with HIV are more likely to have chronic pain and more likely to receive opioid analgesic treatments, and to take higher doses of opioids. In addition, they are more likely to have substance use disorder and mental illness than the general U.S. population.”

CDC found 1,363 deaths due to opioid overdose among people with HIV between 2011 and 2015. In that time, death due to HIV complications decreased 13%, but opioid overdose deaths increased by 43%. An increase was seen in all ages, races, and ethnicities, as well as geographic categories (except for the Western U.S. Census region). Overdose deaths also increased in women of all ages.

There were also increases among all individuals regardless of their risk factor for HIV, but there was a substantially higher death rate in people whose most likely route of HIV transmission had been injection drug use. The rate increased 80% in this group.

“The findings from our analysis underscore the importance of overdose prevention by those providing care and services to persons with HIV, including better integration of HIV and substance use disorder treatment,” Bosh said.

CDC plans to look for trends for overdose deaths across different drugs, such as synthetics, heroin, and prescription opioids.

The next step is if you have women coming into drug treatment programs, you screen them for syphilis.

A British research team reported that for gay men, there was a drop in hepatitis C cases after greater access to potent HCV treatment.

They found that new cases of hepatitis C decreased by 74% in gay men living with HIV in London since the HCV epidemic peaked there in 2015. This followed a greater access to direct-acting antivirals (DAAs) in the city.

There was also a 62% decrease of overall HCV incidence in positive gay men
with greater access to the hepatitis C medications.

“However, re-infection rates remain high and may be increasing,” the team reported. “Further interventions to reduce ongoing transmission including access to treatment for reinfection are likely needed if micro-elimination is to be achieved.”

“The high HCV re-infection rate in our large cohort of [MSM living with HIV] in NYC was independent of whether clearance was by IFN [interferon] or DAA treatments, or by SC [spontaneous clearance], and comparable to Europe rates [re-infection rates of 3–15% following IFN treatment]. Most re-infections occurred within the first 2 years, but infections continued to occur for more than 11 years after clearance. These data suggest that long-term surveillance is warranted for all HIV-[positive] MSM after clearance of HCV infection. Further, strategies to reduce HCV re-infections are needed to meet the goal of eliminating HCV in these men who are at significant risk for HCV infection.”

Note: The two reports above were presented in the Wednesday morning oral abstract session, “Hepatitis C: Now You See Me; Soon You Won’t,” available via webcast.

A Thai research team found a relationship between hepatitis C infection and syphilis in HIV-positive gay men in Thailand.

“A recent surge in HCV incidence is noted among MSM [men who have sex with men] receiving chronic HIV care in Bangkok, Thailand. In the era of effective direct acting agents (DAAs) and ‘Undetectable = Untransmissible,’ sexually transmitted infections, including hepatitis C and syphilis, need to be routinely screened and treated in HIV+ MSM to prevent further transmission to both HIV-positive and HIV-negative partners, particularly among resource-limited settings where the access to DAAs are still low,” the team reported in its conclusion. 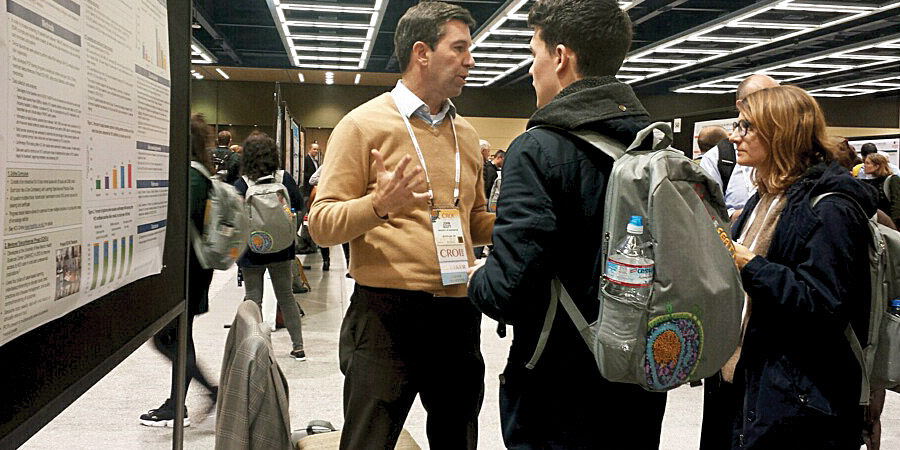 In their report, they noted that hepatitis C is common in people living with HIV, and that the number of cases of chronic liver disease and cancer related to hepatitis C continues to grow. This might be stemmed by simplified screening recommendations and the use of highly effective hepatitis C drugs, they said.

Their research demonstrated good results. “Using a combination of EMR [electronic medical record]-based healthcare system interventions, active linkage to care, and clinician education and training [including use of Project ECHO, see page 30], the number of patients screened for HCV tripled and those treated increased by ten-fold between baseline and Year 4,” the report summarized. “The interventions are scalable and foundational to the broader goal of HCV elimination.”

One of the team’s next steps: To help expand hep C treatment to places with a greater proportion of persons who inject drugs, such as syringe exchanges.

Dr. Scott is a physician at the Hepatitis and Liver Clinic at Harborview in Seattle and an associate professor of Allergy and Infectious Diseases at the University of Washington. The work presented at CROI was conducted in collaboration with the University of Washington; Seattle’s public health department (with three of its community health centers); three large multi-clinic health care systems (Swedish Medical Center, HealthPoint, and Kaiser Permanente Washington); and the Hepatitis Education Project, a hepatitis C patient education and advocacy group. Funding was provided by the Centers for Disease Control and Prevention (CDC) and the Washington State Department of Health.

Losing your disability payments
Positively Aging: A night that was ‘For All Ages’