Hell In A Hot Flash?

Facts and perspectives on menopause and HIV

Who would have thought that medical advancements would defy single-digit T-cell counts and the expectation of death, allowing numerous women aging with HIV to experience the challenges of the “change of life”?

After a week of waking up in the middle of the night with drenching night sweats, I ran to my doctor in a panic reminiscent of the days when my T-cell count was 8. I just knew something major was wrong with me, despite my undetectable viral load. Imagine my surprise when my doctor explained that I had entered perimenopause.

Thirty-five years into the pandemic, HIV is no longer a death sentence, and women living with HIV are aging straight into menopause and beyond. However, information about the impact of menopause on positive women is clouded by limited research, with mixed results from the few studies that have been conducted.

Menopause, often known as “the change of life,” is the changing of a woman’s hormone levels. Basically, a woman produces less estrogen as she grows older, causing a hormonal imbalance and ultimately eliminating a woman’s menstrual cycle. Perimenopause is the time of transition from the beginning of hormonal changes to the ending of the menstrual cycle, when a woman is no longer able to have children.

So what’s the big deal?  No more “periods” is a dream many women have had since their teen years. If only it were that simple. In reality, perimenopause is often a long, daunting process for women.

One desirable aspect that many women experience in this stage is lighter and fewer menstrual cycles. Less attractive symptoms can include:

Of these symptoms, hot flashes tend to be the most intrusive in a woman’s daily routine. Women often describe hot flashes as being akin to spontaneous combustion: a sensation that suddenly emerges from the inside out, leaving you feeling as if the inside of your body has been set on fire. While perimenopausal symptoms, and their severity, vary from woman to woman, a 2014 study in the journal Menopause found that women living with HIV have more severe hot flashes than HIV-negative women.

For me, the most disconcerting finding of the study was that the distress of hot flashes could interfere with healthy life choices, and even HIV medication adherence, for women living with HIV. The fact that hot flashes can impact quality of life is no secret to women who have experienced them. La’Donna Boyens of Norristown, Pennsylvania, diagnosed with HIV in 2000, concurs. She explained that her hot flashes are so intense that she no longer wears socks with her boots in the winter, and carries perfume to combat the smell of sweat. “I never want to go to hell,” La’Donna said, “if it feels like a hot flash.”

Hot flashes while sleeping can be the cause of night sweats—and sleep deprivation. Waking up in the middle of the night with soaked pajamas has become the norm for many perimenopausal women with HIV. For example, my night sweats are so extreme that I now sleep with the heat off in my bedroom—on Chicago winter nights. “Sleeping at night, I feel like a zombie in a sauna,” Tiffany Quinton, an AIDS activist living with HIV in Houston, said. The Menopause study concluded that irritability and loss of sleep from hot flashes were part of what diminished quality of life for HIV-positive women. La’Donna agrees: “Some days I don’t want to leave the house,” she said; “That’s just not me.”

Studies have revealed conflicting results as to whether women with HIV enter perimenopause earlier than HIV-negative women. Women’s Interagency HIV Study (WIHS) results presented in 2004 by lead investigator Dr. Helen Cejtin found no significant difference between HIV-positive and HIV-negative women—the mean ages were 47.7 and 48 years, respectively. Another study, published in the International Journal of STD & AIDS, concluded that women with HIV who had T-cell counts of 200 or below, had a history of injection drug use, or were of African descent tended to experience earlier menopause. Other factors, including tobacco smoking, have also been linked to earlier menopause in some studies.

A major concern for menopausal women living with HIV is bone loss. We know for sure that both men and women living with HIV are at higher risk for bone disease. Additionally, women lose about 10% of their bone mass during the menopause process. Changing hormone levels are widely believed to be responsible for this thinning of the bone. This combination of menopause and HIV leaves HIV-positive women at higher risk of bone disease.

Dr. Cejtin, the WIHS study investigator—who also happens to be my gynecologist—takes a proactive approach to screening for bone loss. Since HIV already causes bone loss, she recommends a DEXA bone scan for all her patients who have begun the perimenopausal phase, to determine their baseline bone mineral density. Other recommendations for women with HIV to combat bone disease include adequate nutrition, quitting smoking, doing weight-bearing exercises such as lifting weights at least three time a week, and daily calcium and vitamin D supplements.

The more women live longer lives with HIV, the more research can be done on the effects of HIV on the menopause process. In the meantime, women have to take advantage of everything we currently know, to live the healthiest life possible with HIV and menopause. One key step is diagnosing perimenopause. If you are in your mid-40s or older, if your body just seems “off”—sweating, mood swings, loss of concentration, irregular menstrual cycles—you can ask your doctor to test your hormone levels. A hormone test is a start, though symptoms are often the best way for a provider to know if you have entered perimenopause.

Aside from medical treatments, adding exercise to our daily routine is also important for women aging with HIV. Exercise is a win-win: It aids in maintaining a healthy heart, helps ease depression and mood swings, combats bone loss, and so much more.

The burdens and joys of being a woman have always taken center stage when it comes to HIV. Chronic yeast infections, cervical dysplasia, and irregular menstrual cycles were the norm for women living with HIV in the earlier days, and many of us who survived have managed these issues well. We must do the same as we age with HIV.

Despite the issues surrounding menopause for women living with HIV, the fact that it means we’re living longer is certainly music to our ears. Tiffany was diagnosed with HIV in 1995 and remembers clearly the day the health care worker informed her that she was dying. She put it this way: “I would prefer to deal with the symptoms of menopause over death from AIDS.”

No matter how you choose to manage your perimenopause symptoms, know that life even with a hot flash is worth living. I’m a living witness, having lived with HIV for 33 years. 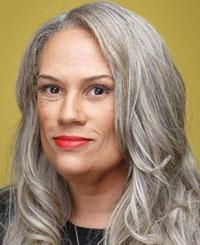 From The Guest Editors
All Systems Go
Not So Fast
Jesse Peel is Aging Swimmingly
Hell In A Hot Flash?
Can Older People Get Some...Satisfaction?
For Me And My Brother
Alone Time
Transforming Lives
Planning Ahead