Billy: ‘Living with HIV myself and being an advocate is what attracted me to this.’

Connecting the lives and hearts of young people living with HIV
By Bill Eugene Willis III May 14, 2018

When I told my family I had decided to take a trip with total strangers to Honduras, they had a few questions. Where was Honduras? they asked. And after they had explored it over the internet, Is it safe? Although I knew the general location of my destination, I had no clue about life in the country, let alone what life there is like for people living with HIV.

I wanted to keep an open mind and not have expectations of the culture I was about to dive head first into. Honduras is in Central America, stretching from the Caribbean Sea to the Pacific Ocean. It has as an estimated population (there hasn’t been a census since the 1990s) of around 10 million. Honduras was also home to the Mayan civilization, which sparked my interest. It has also experienced political upheavals for decades.

HIV/AIDS has taken a significant toll on the quality of life for Hondurans. Living with HIV myself and being an advocate is what attracted me to this. About two hours outside of the capital city of Tegucigalpa, tucked away on a quiet mountaintop, lies the orphanage of Montaña del Luz (“Mountain of Light”). The mission of the orphanage is to help children affected by the HIV epidemic; it is one of three homes specifically for children living with the virus. Not all of the children at the home are living with HIV, and not all children in orphanages are actually orphans; some parents see these institutions as the only viable opportunity for their children.

Before setting off, Youth Across Borders (YAB) trained the Youth Ambassadors they had chosen to take part in their cross-cultural exchange. Six youths from across the United States, ages 18–29, would visit the mountain for a week. The youth ambassadors and the Honduran children we hoped to be connecting with had only one thing in common: we were all living with HIV.

This was the first year that YAB had taken candidates from outside of Ohio, where the organization is based. Their goal is to connect lives and hearts through a cross-cultural exchange. We were instructed through trainings of what to expect upon arriving in la Republica de Honduras, so I wasn’t surprised by our baggage being thrown into a random truck and being escorted by armed guards out of the sprawling dangers of Tegucigalpa.

We rode two hours to the east, with our new Tio (“uncle”), which is what the children call their caregivers. I could tell by the aged buildings that this was going to be quite the experience; the air was electric with our collective excitement. Just a few hours ago, I had only known everyone through social media. Like many this year, I heard about Youth Across Borders through the internet. This was also the first international service trip I had ever taken part in.

Everyone knew Devin, an advocate out of Columbus who had been there for us since being accepted into the program. Devin was in the first group of ambassadors in 2015, but now he is the vice president of YAB. He’s been on this trip every year, seeming almost at home and helping us break the ice with the children and staff of Montaña del Luz. We were greeted by a song and 30 fresh-faced residents of the homely Honduran compound.

We were taken to our rooms to gather our things before dinner and rest. Immediately we all began chatting with our roommates. Most of the ambassadors were advocates where they lived, ranging from Texas to New Hampshire. When dinner was served, I realized that our diets were about to drastically change. Everything we would consume was raised on the mountain or grown locally.

That night was the first time I would go to bed and rise with the sun as many Hondurans do. Tucking ourselves into our mosquito nets that night, my roommates and I talked about our expectations. We hadn’t expected such a beautiful and clean tropical paradise when we had left our snowy homes in early January.

We woke up to coffee, watching the sunrise from the side of a valley, and we were treated to the cries of roosters being carried by the wind. Our first full day had begun. As strangers from the U.S., and living with HIV, we quickly atracted an audience of inquirers. With few exceptions, the kids really latched on to us. Most of us, though, had limited knowledge of Spanish. We attempted to connect by relying on our skills from our advocacy and our jobs. We were nurses, models, HVAC technicians, teachers, and students. Through a combination of Spanish and hand gestures we learned to communicate, although we had an amazing interpreter for workshops. Mary, a native Argentinean from California, not only translated the words, but the emotions behind them as well.

We had many activities to keep children busy throughout the week. I had the children do a drawing activity, having them depict words such as Love, the Future, and Courtney. Courtney, the president of YAB, loved the kids, and they loved her back. If everyone could see that they saw Courtney differently, then I could teach them how people see other people and situations differently. Almost every activity that week involved an underlying message of perseverance or empowerment, but we were also careful not to step on their own cultural norms. 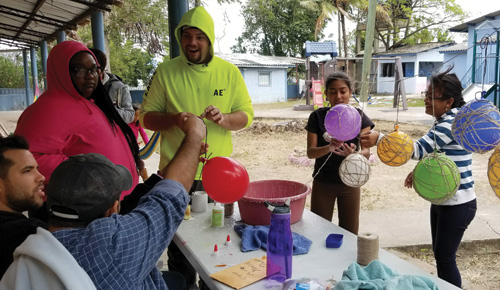 Craft-making with the children of Montaña del Luz

Ambassadors and volunteers organized crafts, treasure hunts, talent shows, garden stone making, and many planned group activities with the children; yet we had all been warned that plans in Honduras change sometimes, due to the political atmosphere. Other activities took us off the mountain. We visited older children who lived in the town below. They were all around high school age, and much more standoffish as you might expect of any teenagers. Some of them even stared down at their cell phones as we gulped down our sodas made with real sugar. Our conversations ranged from dating and our jobs to racism and transphobia. It was a night for inquisitive minds; it was the cultural exchange we had all longed for. We played cards and talked for hours, helping these young folks navigate the tricky waters of living with HIV.

On Sunday, we ventured to a market in a neighboring town. It was vibrant and alive with street art and marzipan cookies of every shape; the air was thick with savory aromas from the cafés. The shops were stuffed with beautiful handmade crafts. The shopkeepers even accepted our U.S. dollars alongside the local Honduran lempira. We all loaded up on gifts and keepsakes for our return to the U.S.

My second activity of the week was with Marnina, from Houston, and a member of Positive Women’s Network (PWN). We discussed People First Language, which puts people before their disability, reducing stigma and stereotypes. We turned first to the orphanage’s resident psychologist, learning how HIV is referred to and talked about in Honduras. The word “infected” is considered stigmatizing in the U.S., but in Honduras, the preferred word is “infectado.” A word untranslatable into English is used as a slur, often used against the children of the mountain—Sidioso. It’s rooted in the Spanish word for AIDS—SIDA. [Editor’s note: It’s akin to saying “filled with AIDS.”] Mindful of cultural differences, we continued with our presentation. We were impressed to find that many of the things on our agenda were already being used by the children. They already knew what their undetectable status meant and how they wanted to be spoken to. They followed our talk with what they call the Charla de luz [“talk of light”], which they use to educate their own and other communities.

Their program included a devilish depiction of HIV and angelic helper T cells, just what you would expect from any school play. We were all blown away by how knowledgeable the children all were. The gates seemed to open on us, all diving deeper into each other’s knowledge banks. That night at medicina, the time when we all took our ARVs, they examined our pills, some of which they had never seen. We talked about the side effects and cost, how easily we could obtain our medications, and learned that some of the kids were here because this is the only place they could obtain these lifesaving drugs.

Montaña del Luz used to be a hospice for children dying of HIV/AIDS. Now it is an orphanage, which is not uncommon in some developing areas of the world. Although some of the children had families, these institutions seem like more viable options for a better future for children.

Montaña del Luz used to be a hospice for children dying of HIV/AIDS. Now it is an orphanage, which is not uncommon in some developing areas of the world. Although some of the children had families, these institutions seem like more viable options for a better future for the children. Some family visits still happen, even kids having families to return to, going back for a short time during Christmas break from school.

Despite the social and political problems that come with life in Honduras, we gained a new appreciation for our lives back home. We felt a great pain at having to leave this place. I personally felt something change inside.

Life in Honduras can be simple and slow, but it wasn’t the unendurable poverty I had expected. Through talks with my new ahijado (“godson”) and the other children, I got to glimpse the world through innocent eyes, something I hadn’t done since contracting the virus and becoming an advocate back in North Carolina. I remembered that sometimes the most important things I need are already inside myself.

When I returned to the U.S., I was filled with tears. It still is hard to describe that feeling in words; it lies somewhere between the joy of experiencing something and a deep regret for having to step out of someone’s life.  It had a profound effect on how I value the things in my life and what I want to continue doing. If you ever get a chance, I strongly recommend volunteering with children living with HIV, because you just might come away with a new attitude.

For more information about Youth Across Borders, go to youthacrossborders.org.

The needs, priorities, and future of long-term survivors
Milestones of a Mississippi Man
Crossing borders
‘Nothing about Us without Us’
Stigma shock
‘Working with patience and compassion’
Adherence through social media
Finding life After Louie
No shame in Sin Vergüenza
HIV criminalization laws hinder prevention efforts