If you’re HIV-positive, could you be arrested for sneezing? Apparently, yes 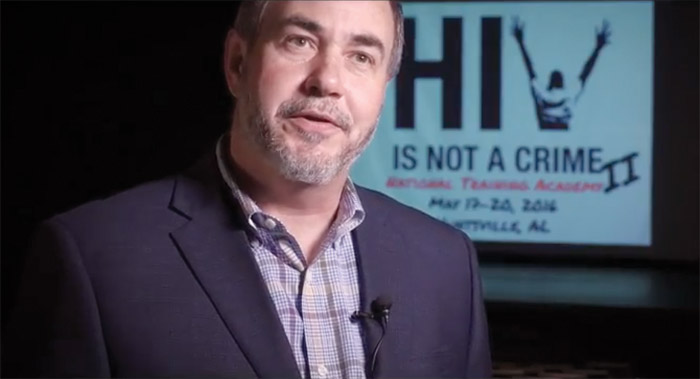 One man had a plastic bag zip-tied over his head because he had the "communicable disease of HIV."

This was one of the horror stories told at the HIV is Not a Crime II training academy for legal and social change, which you can watch in a short video.

Noah Raper, an HIV criminalization survivor from Tennessee, was arrested after someone made a false accusation against him. “It just took someone saying that I spit on them trying to give them AIDS,” he said, then “handcuffs went on and I was the one assaulted.”

Because the incident took place in a large store, video surveillance proved his side of the story. “So it proved that I never spit on anyone, but all it took was for me to admit that I had HIV [to be arrested].” He said were it not for the surveillance evidence, “I would be telling my story from behind bars.” Raper seemed so shaken while telling his story that he appeared to be on the verge of tears.

In Oklahoma, a woman accused Apollo Gonzalez of giving her HIV by sneezing on her. “They [the police] got to put a bag over my head and zip-tie it,” he said, his voice shaking at the memory. Like Raper, he appeared on the verge of tears.

Leslie Flaggs of Iowa said, “I went to jail and I don’t think it was right, but I didn’t tell him [her partner]. I’m not gonna lie. I didn’t tell him I was positive. But as time went on I finally told him. So it was a big confrontation going back and forth.” She received four years of probation and put on a sex offender registry. “I couldn’t go to pools. I couldn’t go by schools.”

Monique Howell-Moree from South Carolina, another criminalization survivor, said it’s very hard to disclose “when you don’t even know how to disclose.” She said people living with HIV should not be labeled “monsters” by those who don’t know what it’s like to walk in their shoes.

As previously reported in Positively Aware, HIV is Not a Crime II focused on expanding the HIV anti-criminalization movement by joining forces with other movements for justice. Immigrants and people of color, as do people living with HIV, tend to receive harsher punishment and unfair execution of the law. 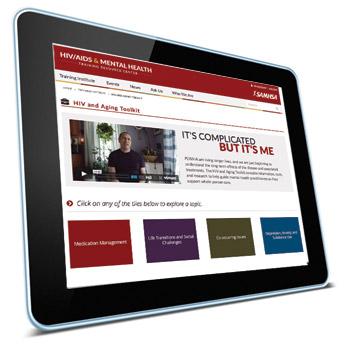 Toolkit for aging with HIV:

The HIV/AIDS & Mental Health Training and Resource Center established an online toolkit for older people living with HIV/AIDS (PLWHA). According to the center, “PLWHA are living longer lives, and we are just beginning to understand the long-term effects of the disease and associated treatments. The HIV and Aging Toolkit contains information, tools, and research to help guide mental health practitioners as they support whole-person care.” Go to hivmentalhealth.edc.org/toolkits/hiv-and-aging-toolkit.

In October, the FDA added a boxed warning to the drug labels of direct-acting antiviral (DAA) medications for the treatment of hepatitis C virus (HCV). The warning states that there is a risk of hepatitis B virus (HBV) becoming an active infection for patients with a current or previous infection with HBV and treated with one of the DAAs for HCV. The DAAs are Daklinza, Epclusa, Harvoni, Olysio, Sovaldi, Technivie, Viekira Pak, Viekira Pak XR, and Zepatier.

“At the United States Conference on AIDS (USCA) this week, NASTAD (National Alliance of State & Territorial AIDS Directors) announced its commitment to communicating one of the most ground-breaking developments in the last two decades of the epidemic: people living with HIV on effective antiretroviral therapy (ART) cannot transmit HIV,” NASTAD reported in a press release dated September 15. “The announcement, as a sign-on to the Prevention Access Campaign’s consensus statement, reinforces the belief that many have had and that science has now proven.” Details at NASTAD.org.

The FDA in September announced a drug label update stating that Latuda (lurasidone), an antipsychotic used to treat schizophrenia and depressive episodes in bipolar 1 disorder, cannot be taken with the following HIV medications: Aptivus, Genvoya, Norvir (and Kaletra, which contains Norvir), Lexiva, Prezista, and Stribild; it also cannot be taken with Reyataz if used with Norvir. Nor can Latuda be used with the rarely used HIV medications Crixivan, Invirase, and Viracept. The drug labels for Evotaz and Prezcobix already stated that Latuda cannot be used with them. The FDA said Latuda cannot be used with these medications due to the potential for serious and/or life-threatening reactions.

The FDA in September added longer-term safety and efficacy data to the Genvoya drug label, as well as stating that it can be used with the hepatitis C medications Epclusa and Harvoni. Also added was information about pregnancy.

The FDA in September added QTc prolongation, a heart complication, to the list of potential side effects of Sustiva (efavirenz, also found in Atripla). The agency said alternatives to efavirenz should be considered if patients are at higher risk of Torsade de Pointes or also taking a drug with a known risk of Torsade de Pointes; also if taking the anti-infective clarithromycin or the anti-malarial artemether/lumefrantrine.

In August, the American Society of Addiction Medicine (ASAM) released an opioid addiction treatment guide for patients, families, and friends. Go to asam.org/quality-practice/patient-guidelines-resources.

Depression in people living with HIV increases their risk of heart attack, according to a study from the U.S. Department of Veterans Affairs. The report from the Veterans Aging Cohort Study was published online in JAMA Cardiology over the summer. Go to economictimes.indiatimes.com/magazines/panache/depression-in-hiv-patients-may-increase-risk-of-heart-attack/articleshow/53857391.cms.

PrEP has been all the rage, but many people don’t realize that PEP exists, or forget about it. HIV prevention with PrEP comes before exposure, while PEP—post-exposure prophylaxis—comes after exposure. In September, AIDSInfo.nih.gov updated its PEP factsheet to show the latest on what you need to know about taking PEP.

Previously known as Fulyzaq (generic name crofemeler), the only FDA-approved drug for treating HIV-related diarrhea has been acquired by Napo Pharmaceuticals and is now marketed under the name Mytesi. The company has launched patient co-pay and patient assistance programs to allow for broader access to Mytesi. For details, go to mytesi.com/mytesi-savings.html.

The interactive national PrEP Provider Directory through Emory University and MAC AIDS Fund went live in September. To find a medical provider to prescribe the HIV prevention pill (Truvada as PrEP, or pre-exposure prophylaxis), go to preplocator.org. Although any prescriber can prescribe PrEP, there’s been a reluctance on the part of many providers to do so.

“PrEP has the potential to substantially reduce the number of new HIV infections in the United States but only if people know how and where to get it,” says Aaron Siegler, PhD, in a press release. He is a research assistant professor in the Department of Epidemiology at Emory University’s Rollins School of Public Health. “Importantly, the tool features a search function that allows users to search for PrEP providers who would prescribe to individuals without insurance.”

The Treatment Action Group (TAG) has added a new factsheet on the latest hepatitis C
(HCV) medication, Epclusa. The TAG hep C factsheets include other medications (Sovaldi, Olysio, Viekira Pak, Harvoni, Daklinza, Zepatier, and ribavirin) as well as diagnostics and adherence. The set is available in Spanish and English. TAG reported that its Hepatitis/HIV Project “focuses on optimizing quality of, and broadening access to, HCV care and treatment for communities and individuals by continuing its domestic and international work with other activists, regulatory agencies, pharmaceutical companies, clinicians, and the patient community.” Go to treatmentactiongroup.org/hcv/factsheets.

“In the face of highly restrictive and discriminatory health insurance plans within the Affordable Care Act (ACA) Marketplaces, the Center for Health Law and Policy Innovation of Harvard Law School (CHLPI) is undertaking a new advocacy campaign to enforce the health care rights guaranteed by the ACA for people living with HIV and other chronic conditions,” the organization reported in September. For more information, go to chlpi.org.

Three advocacy organizations—Treatment Action Group, Human Rights Campaign, and the Fair Pricing Coalition—have launched a new campaign to mobilize LGBTQ people and allies to address the continuing rise of prescription drug prices in the U.S. For details, go to fairdrugpricesnow.org.

Fashion designer Mondo Guerra “yarn bombed” the U.S. Conference on AIDS (USCA) with an installation labeled “Positivitrees.” In an artist statement, the winner of the Project Runway All Stars debut season, who’s living with HIV, said, “This project is rooted in the importance of having an ongoing dialogue: with my work, with project collaborators, with my doctors.” Guerra is part of Merck & Co.’s I Design HIV awareness campaign. Go to ProjectIDesign.com.

Taking the long view on care and prevention

A number of HIV organizations, including Gay Men’s Health Crisis (GMHC), have teamed up to advocate for people with and without HIV regarding their prevention and health needs free of stigma and using best medical practices. “If we are going to meaningfully advance HIV education, prevention, treatment, and care, it will be due to multidisciplinary collaborations like HIV: The Long View that identify and strive to help work through the complex socioeconomic and healthcare factors that currently deny a long-term healthy future to many people living with and at risk for HIV,” said GMHC Chief Executive Officer Kalsey Louie in a press release. Read their report at HIVTheLongView.com, which uses qualitative and quantitative research from the Future Foundation. Funding for the advocacy effort comes courtesy of partner Gilead Sciences. 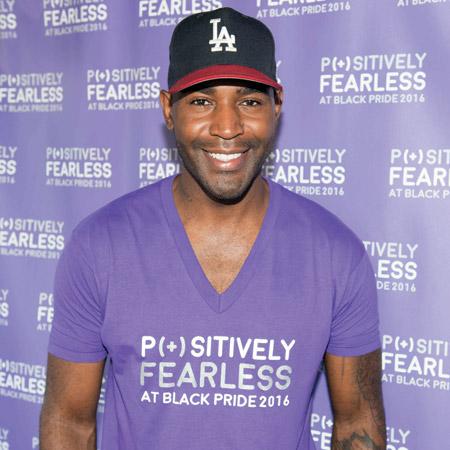 Karamo Brown (above), who became the first openly gay African American in reality TV on MTV’s The Real World in 2004, spoke at Atlanta’s Black Pride Celebration in September as part of Janssen Pharmaceuticals’ “Positively Fearless” campaign. According to a company press release, “‘Positively Fearless’ is a movement that celebrates being Black, being gay, and being HIV-positive.” Also joining the campaign is advocate Deondre Moore, who became HIV-positive while a teenager. Together, the men encourage people to get tested and if HIV-positive, to take an active role in their health.