In July, the FDA approved the Bio-Rad BioPlex2200 HIV Ag-Ab test, the first approved by the agency that can differentiate between HIV-1 antibodies, HIV-2 antibodies, and HIV-1 p24 antigen. HIV-2 is more common in resource-poor countries and HIV antigen can detect infection earlier, before HIV antibodies appear.

In July, the FDA approved two new medications for the treatment of hepatitis C virus (HCV).

Daklinza (dak-lin-za, generic name daclatasvir) was approved for use with Sovaldi (sofosbuvir) to treat HCV genotype 3 infections. In studies, the combination showed a cure rate of 98% in people without cirrhosis and 58% in those with cirrhosis. None of these patients had taken HCV treatment before. For those who had, the rates were 92% and 69%, respectively. The most common side effects for the combination were fatigue and headache.

Technivie contains ombitasvir, paritaprevir, and ritonavir and is to be used along with ribavirin for HCV genotype 4 in patients with no cirrhosis. In research, all 91 patients taking Technivie with ribavirin experienced a cure, compared to 91% of the 44 patients not taking ribavirin. The medications in Technivie are also available in Viekira Pak, a hep C therapy that includes a fourth drug, dasabuvir.

Thanks to the results of two studies released at the International AIDS Conference in Vancouver in July, U.S. treatment guidelines for HIV have been updated to strengthen the recommendation that everyone living with the virus be on antiviral therapy.

“With the availability of the START and TEMPRANO trial results, the Panel’s overall recommendation remains the same: ART is recommended for all HIV-infected patients regardless of pre-treatment CD4 count,” the Department of Health and Human Services (DHHS) reported in a press release. What has changed is the strength of the recommendation, upgraded to A1+ (indicating “strong recommendation based on data from randomized controlled trials”). Go to aidsinfo.nih.gov.

In August, the Health and Human Services panel on perinatal HIV guidelines made several updates. These included information on women born with HIV; hepatitis C co-infection; the use of HIV treatment and PrEP to prevent transmission in sero-different couples trying to conceive; reaffirmation of data showing no correlation between birth defects and the use of efavirenz (Sustiva, found in Atripla) in the first trimester; and the upgrading of boosted Prezista (darunavir/ritonavir) and also Isentress as preferred treatments for HIV-positive pregnant women taking antiviral therapy for the first time (boosted Reyataz remains a preferred therapy as well). Go to aidsinfo.nih.gov. 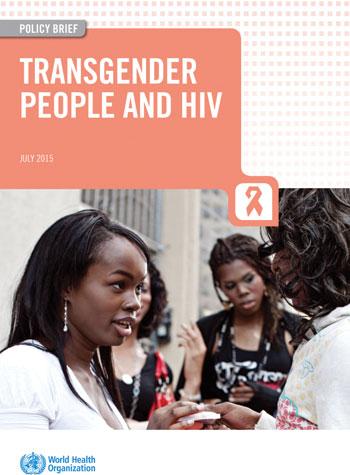 In August, the FDA added a side effect and drug interactions with carbamazepine (Tegretol) and metformin to the labels of Tivicay (dolutegravir) and Triumeq (dolutegravir/lamivudine/abacavir).

In the Triumeq label, under “Less Common Adverse Reactions Observed in Clinical Trials,” was added “Psychiatric: Suicidal ideation, attempt, behavior, or completion. These events were observed primarily in subjects with a pre-existing history of depression or other psychiatric illness.” The change was made to match the drug label of Tivicay (which is contained in Triumeq).

When taken with carbamazepine, Tivicay should be taken twice a day instead of once a day in people on HIV therapy for the first time or who have been on HIV therapy before but have not taken medication from the class of drugs to which Tivicay belongs (integrase inhibitors, or INSTIs—the other INSTIs are Vitekta, which is found in Stribild, and Isentress). Those who have previously taken an INSTI and have certain INSTI-associated drug resistance, or suspected resistance, should not use carbamazepine, but use an alternative to this medication instead.

If Triumeq is used with carbamazepine, add a dose of Tivicay 12 hours apart from the Triumeq.

In a study published in the Lancet HIV in July, good results were reported for patients co-infected with HIV and HCV with the combination of grazoprevir (MK-5172) and elbasvir (MK-8742). The C-Edge CO-INFECTION study looked at 218 patients with HCV genotypes 1, 4, or 6, with or without cirrhosis, and found a 98% sustained virologic response (SVR) at 12 weeks. Although SVR is normally considered a cure, seven patients (all without cirrhosis) relapsed, with two of them confirmed as having been re-infected with HCV. All 35 patients with cirrhosis achieved an SVR at week 12. The most common adverse events were fatigue, headache, and nausea.

In July, Janssen Therapeutics submitted a supplemental New Drug Application to the FDA to decrease the amount of time that the hep C medication Olysio can be taken. Based on the results of the Phase 3 OPTIMIST-1 and OPTIMIST-2 studies, Olysio (taken with Sovaldi) can be used for 12 weeks in patients on HCV therapy for the first time and for eight weeks in treatment-experienced patients. These patients had genotype 1 and no cirrhosis. Those with cirrhosis can take the treatment for 12 weeks, whether they are already treatment experienced or not.

In July, the White House issued an updated version of the National HIV/AIDS Strategy (NHAS). According to AVAC, an organization dedicated to HIV prevention, “The updated NHAS has renewed the focus on those most affected by HIV: gay and bisexual men of all races, but especially black men, heterosexual black women and men, young people, people who inject drugs, and transgender women. There will be prioritization on places, like the southern U.S.—where nationally 50 percent of new infections now occur—and key metropolitan areas.” The AIDS Institute, which maintains a policy office in D.C., reported that, “The updated Strategy continues a focus on reducing new infections, increasing access to care and treatment, reducing health disparities, and improving federal coordination. It also sets new outcome measures and considers new policy developments including the Affordable Care Act and scientific advancements such as treatment as prevention and pre-exposure [prophylaxis] (PrEP).” Go to aids.gov/federal-resources/national-hiv-aids-strategy/nhas-update.pdf. 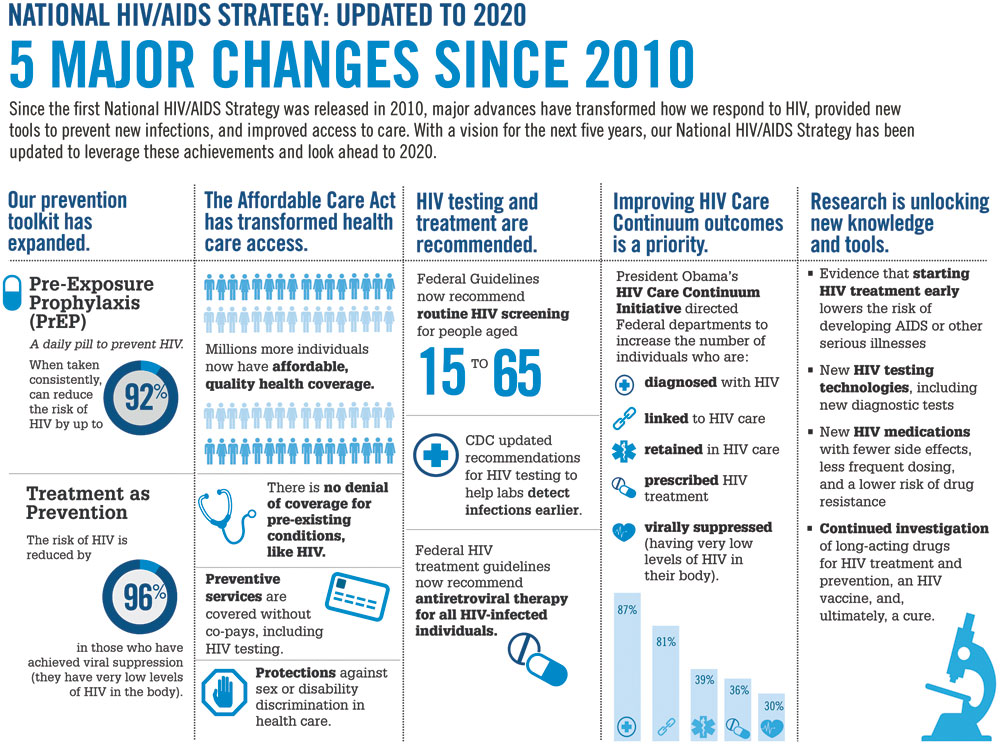