A photo shoot turns into a positive social gathering

The message behind the cover photo of this year’s HIV Drug Guide is to portray the many faces of HIV. Eighteen people living with the virus answered our call. They ranged in age from 21 to 62, from long-term survivors who have been positive more than 20 years to someone who were only recently diagnosed. They shared their thoughts about being HIV-positive.

“As a long-time survivor of living with HIV, the word strength comes to mind,” said Christina Joly, 41, who has been HIV-positive 26 years. “Not only my own strength, but the strength of our community. The strength of friends, family, partners, and even strangers, who stand by our side in good times and bad.”

“HIV is but one small part of me; it doesn’t define me,” said Rob Garofalo, 49, HIV-positive since 2010. “It has, however, made me a stronger and kinder person. It hasn’t always been easy, but it won’t stop me.”

Jerry Tamar Forrest, 28, viewed HIV as a challenge for personal growth. “I use my status to empower myself,” Forrest said. “It’s an enforced opportunity to emerge and evolve into something greater. Evolution is my solution.”

“Being HIV-positive gave me a positive outlook on life,” said Frank Karels, 57, HIV-positive 10 years. “It has made me appreciate life more.”

“This summer I will celebrate 20 years of living positive,” said Mary L. Miller. “I look forward to the future.”

Johnny Conner, 57, has been HIV-positive 20 years. “Everything you do right today helps you stay healthy for tomorrow,” he said. 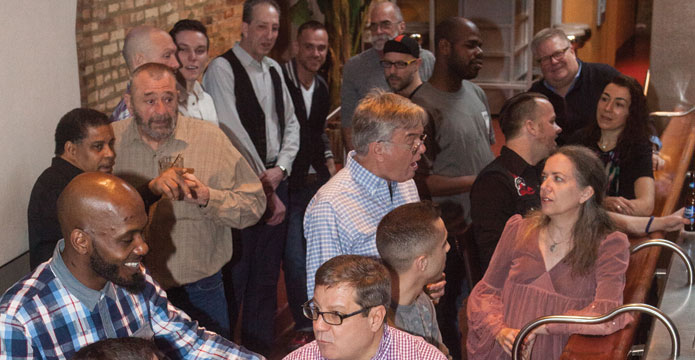 Staying healthy has become possible, even easier, with development of the medications available today. “It’s a chronic manageable disease, that’s what I tell people,” said Rob Campbell, 41, HIV-positive 10 years. “Just like someone’s diabetes or another person’s heart issue, or any other illness managed by medications. It’s only an issue if someone makes it an issue. But with education and conversation it doesn’t have to be.”

Many of those who took part in the photo shoot expressed a desire to give back to community and to reach out to those in need. Scott C. Weidler, 55, has been HIV-positive 12 years. “I’ve been very lucky—fully insured, good doctor, early diagnosis, supportive friends,” he said. “As one of the lucky ones, I feel a sense of responsibility to care for others and to offer advocacy for all.”

“In this season of my life, it is necessary to give back, help my fellow HIV-positive veterans with their struggles,” said Roy Ferguson, 63, HIV-positive more than 18 years, and coordinator of a self-help/education group for HIV-positive veterans at a Veterans Administration hospital. “I go to the Illinois State House and Senate three times a year to lobby for needed social services, and to change criminal transmission laws about HIV to reflect scientific knowledge rather than fear.”

During the photo shoot, 26-year-old AJ Miranda had looked as if he wanted to say something. Afterward, he talked about how he had been given a copy of POSITIVELY AWARE when he tested positive in March 2014.

“I can’t lie and say this hasn’t been a difficult experience, with so many different emotions,” Miranda said. “But honestly, it’s better to know your status and to face it. That way you can take care of yourself and lead a healthy life.”

Taking part in the cover shoot was his way of encouraging other young people to get tested and take control of their lives.