How To Use This Guide

The HCV Drug Guide includes medications that are FDA approved, expected to be approved this year, or are likely to be approved through June 2017. The information provided on the FDA-approved drugs comes from the package labels, as well as other sources such as the AASLD/IDSA Recommendations for Testing, Managing and Treating Hepatitis C (HCV Guidance), conference presentations and medical journals. For the non-FDA-approved drugs, the information comes from conference presentations, and medical journals.

Each drug page will include:

Drug names can be very confusing. We include the brand name, the generic name, and often an abbreviation. For example, Sovaldi is the brand name of sofosbuvir. Sovaldi can be abbreviated as SOV, and sofosbuvir is abbreviated as SOF. Drugs that have been FDA-approved will have a brand name, while those that have not yet reached that stage will only have a generic (or common) name. In some cases, it might not even have a name, but rather a series of letters and numbers (for example, MK-5172). For those drugs which have been FDA-approved, the brand name will appear first, at the top of the page, followed by the common name(s); for all other drugs the common or generic name will appear first.

We will indicate if a drug is approved, and any drug that has been submitted for FDA approval will have an estimate of its approval date.

The “direct acting antiviral” or DAA era of HCV treatment has seen the development of several different classes as well. Currently, there are five classes of HCV drugs, and five multi-class fixed dose combinations (with Epclusa, the SOF/VEL combination, approved by the FDA in June of 2016):

Genotype (GT) refers to the strains or variations of HCV. Worldwide, there are probably 11 distinct genotypes, but for this guide we will only refer to GT 1–6. In the United States, GT 1–4 are most prevalent, with GT 1 the most common overall. Within each genotype, there are several subtypes that are indicated by numbers and letters (GT 1a and GT 1b and so on). Although different genotypes can play a role in disease progression or severity, it is especially important to know one’s genotype to determine the correct treatment. We will list the genotype(s) that the specific HCV medication works against, both those that are FDA approved as well as those that have enough evidence to be used “off-label.”

We will note HCV drugs approved for use in HIV/HCV co-infected patients, both those that are FDA approved and off-label.

HCV drugs are taken in a variety of ways, at different times, and with differing food restrictions. Sometimes, the same drug is taken differently depending upon a variety of factors like genotype or liver health. This section will describe the dosage requirements for the drug, as well as provide details about restrictions and other relevant information.

This section includes the name of the company that makes the drug.

The AWP is the measure used by insurance companies—both private and public—to determine the average cost of prescription drugs. HCV drugs are very expensive, and there is much concern over the burden these high costs are going to place on programs like Medicaid and Medicare, as well as the Veterans Administration and private insurance carriers. Patients should never have to pay for medications at this price, but it’s still important to know these costs when shopping for health insurance coverage. Each of the pharmaceutical companies has a Patient Assistance Program (PAP) to help uninsured and underinsured people cover all or part of the costs. There are also pharmaceutical co-pay programs and non-profit organizations that can help with some additional support for co-pays. A list of HCV drug patient assistance and co-pay programs appears on page 35 of the HCV Drug Guide.

Potential side effects and adverse events

This section offers information about side effects and adverse events associated with the HCV drugs. It’s not an exhaustive list, but rather a selection of the most commonly reported side effects. The information comes from the package insert and study data for the FDA-approved drugs, and clinical trial data for the ones that have yet to receive FDA approval. Since HCV medications are never taken alone, we’ll cover potential side effects that are associated with the entire regimen, as opposed to a single drug. It may be hard to separate one cause of a side effect from another, and in the end, it doesn’t really matter what the cause is but only that you are experiencing it. Everyone experiences side effects differently: Just because it’s listed doesn’t mean you will automatically have it. Talk to your medical provider about side effects before starting treatment, communicate with him or her about any you may have during treatment, and get blood tests as directed to look for side effects.

This section provides information about the variety of known and potential drug interactions. Like the side effects section, it’s not an exhaustive list of interactions, but rather a list of the most important ones. You can find a complete list in the package insert, but you should also talk to your medical provider and/or pharmacist about any medications you are taking so you can minimize drug interactions. The information comes from the package insert and clinical trial data for the FDA-approved drugs, and clinical trial data for the ones that have yet to receive FDA approval.

This section contains information that does not fit in any of the above sections, but is still important for you to know. 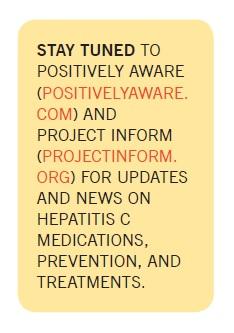 We have seen several changes since last year’s publication of the HCV Drug Guide: Pegylated interferon has been removed from this year’s guide. This injectable medication was the standard of care (in combination with ribavirin) for over a decade, but it was a medicine that was taken over a long period of time, with severe side effects and a low cure rate. Today’s medications do not need to use interferon any longer, but it can be found on positivelyaware.com.

We saw the FDA approval of the drugs Technivie, Daklinza, and Zepatier, as well as updates to Sovaldi, Harvoni, and Viekira Pak.

Most recently, approved by the FDA on June 28, Epclusa marks an exciting development in the treatment of HCV: A medication that treats all genotypes taken once daily without ribavirin and potentially curing HCV in as little as 12 weeks with minimal side effects.

HCV Drug Chart
How To Use This Guide
Accessing Hepatitis C Medications
Hepatitis C Prevention For People Who Inject Drugs
Resources, Services, and Information
Which HCV Treatment Is Right For Me?
After the Cure