Dancing Around HIV: When Do You Know If You've Ever Done Enough? 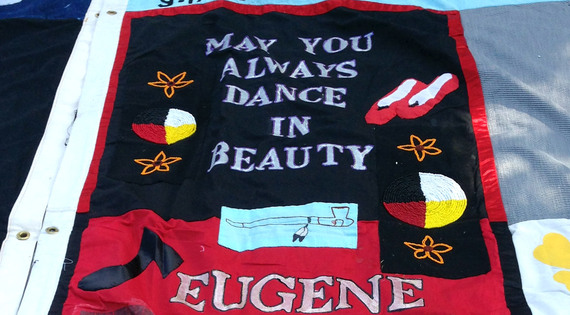 This post was originally published on 07/18/2014 on the now-closed HuffPost Contributor platform.

On July 12 and 13 I participated in the Ride for AIDS Chicago. It was an amazing and unforgettable experience, with 430 riders and crew trekking 200 miles over two days from Evanston, Illinois, to Elkhorn, Wisconsin, and back. The ride raised over $840,000 in support of Test Positive Aware Network (TPAN) and its community partners, to help fight HIV/AIDS and eliminate stigma.

This was my first AIDS ride ever, and the 11th year of the Ride for AIDS Chicago, and I've worked for TPAN for almost 22 years. So some might ask, "What took you so long?"

I could provide a number of responses, such as, "I could never ride 200 miles," "There were conflicts in my schedule," or, "I've always volunteered in some capacity." But I don't really have a good reason why I've never taken part.

I do know that the for last few years, during opening and closing ceremonies, I've witnessed a spirit and camaraderie among riders and crew that made me more than a little envious, and secretly I longed to be part of it. I could see it, but I couldn't touch it, because I had to experience the ride to fully understand what it meant.

For anyone who takes part in a ride like this, it's personal. For me the ride came to be about my friend Eugene, who died of AIDS in 1989, when he was only 30 years old. Eugene and I were good friends when we were both just coming out in the late '70s in Grand Rapids, Michigan. I remember I would pick up Eugene in my old Cutlass, and we'd hang out with friends or go to work together at the Carousel, one of only two local gay bars, where I was a DJ and he was a waiter.

Eugene took ballet in his spare time and had aspirations of one day becoming a dancer and escaping the drudgery of life in a conservative, religious town in the Midwest. Known affectionately as Gina when he occasionally did drag, Eugene was very much in touch with his feminine side, and not afraid to show it. I think that's part of what I loved and admired about him most, as I was often trying to suppress that part of myself and "butch it up," as they say -- probably because I was so teased and bullied throughout school. But I'm sure Eugene was teased and bullied too, not only for being gay but because he was also part Native American (Ottawa/Chippawa).

When I moved to Chicago in 1981 to DJ at Dugan's Bistro, I would see Eugene from time to time when I would go back to Grand Rapids to visit family and friends, but eventually we lost touch. Then one day I heard he'd gotten sick and had moved back north to Traverse City to be with his family. Every now and then I would get a call from Eugene, and we would have long talks about what he was doing and everything he was going through. I remember sometimes he would repeat himself; I don't know if AIDS was affecting his brain with dementia or if he was just lonely or bored, or a combination. But the thing that sticks with me the most, and what I've always felt guilty about, was that sometimes I would get a little impatient during those calls. Here my friend was dying, and all I could think about was myself.

Crewing for the ride, I was told beforehand, was actually harder than riding. I don't know if that's true, but I do know that getting up at 4 a.m., jumping and cheering on riders for hours at a time in the middle of cornfields in the hot sun, wearing a tutu with mosquitos biting at you, is exhausting, both for me and for my partner Stephen, who crewed alongside me. But the reaction from the riders made it all worthwhile: They were so appreciative to have us there that any discomfort or fatigue we felt was immediately erased by their smiles and laughter. They needed us as much as we needed them.

After that first day I was exhausted but exhilarated and couldn't wait until day two. I looked forward to the closing ceremonies and thought about how emotional I would probably get. But as I lay in bed that night, tears started flowing down my cheeks, and at first I didn't quite understand why. It wasn't a sad cry; it was more a joyful one. It was as though life had suddenly come full circle, and I was exactly where I was supposed to be, at the right time. I literally cried myself to sleep.

After the second day, and during the closing ceremonies of the ride, I walked quietly through the crowd, hand-in-hand with the other Positive Pedalers, all of us who had displayed orange bandanas and flags during the ride to symbolize being open about our HIV status. As we neared the end of the procession, we hugged each other, but surprisingly no tears came to me then, just a close bond with all my fellow riders and crew. Afterwards my partner and I made our way over to the Quilt display and silently looked at Eugene's panel. (We'd been asked months in advance if we wanted a panel of someone we knew at the ceremony.) "May you always dance in beauty," it read, and there were a pair of ballet shoes, a peace pipe, and gold stars on a black-and-red background. As my eyes fell upon the date of his death, I realized it was just four months later that I would test positive for HIV.

It dawned on me then that during those conversations with Eugene, HIV/AIDS was only peripherally a part of my world. I did not yet know that I was HIV-positive; all I knew was that some of my friends were dying, and I had been one of the lucky ones, at least so far. While others had chosen to become activists, I came late to the game. I had found a way to push HIV and AIDS out of my mind, and out of my life, by working in the clubs (and all that came with it), not realizing that sooner or later I would be forced to take notice when my own diagnosis was staring me in the face.

This has been a hard thing for me to come to terms with over the years, and something I still struggle with from time to time. There are some days when I embrace the work, my activism, and keeping up with the latest about HIV/AIDS. And there are other days when I want to forget about it all and just escape. Because no matter what I do it never seems like it's enough, or that I could somehow be doing it better, or that maybe I waited too long to decide to act.

But the ride taught me an important and valuable lesson: It's never too late to make a difference and have an impact. It's incredibly freeing to be a part of something bigger than yourself, and it gets you out of your head. The support you receive from family and friends is humbling. Most importantly it has helped me to find peace with a part of my past, because even though I don't understand why Eugene had to die and I was allowed to live, I know now that he's looking down and smiling -- while doing a fabulous demi-plié.