Andrew Espinosa on A Day with HIV

Why one person living with HIV takes part in a groundbreaking anti-stigma campaign
By Julie TaddeoSep 16, 2019 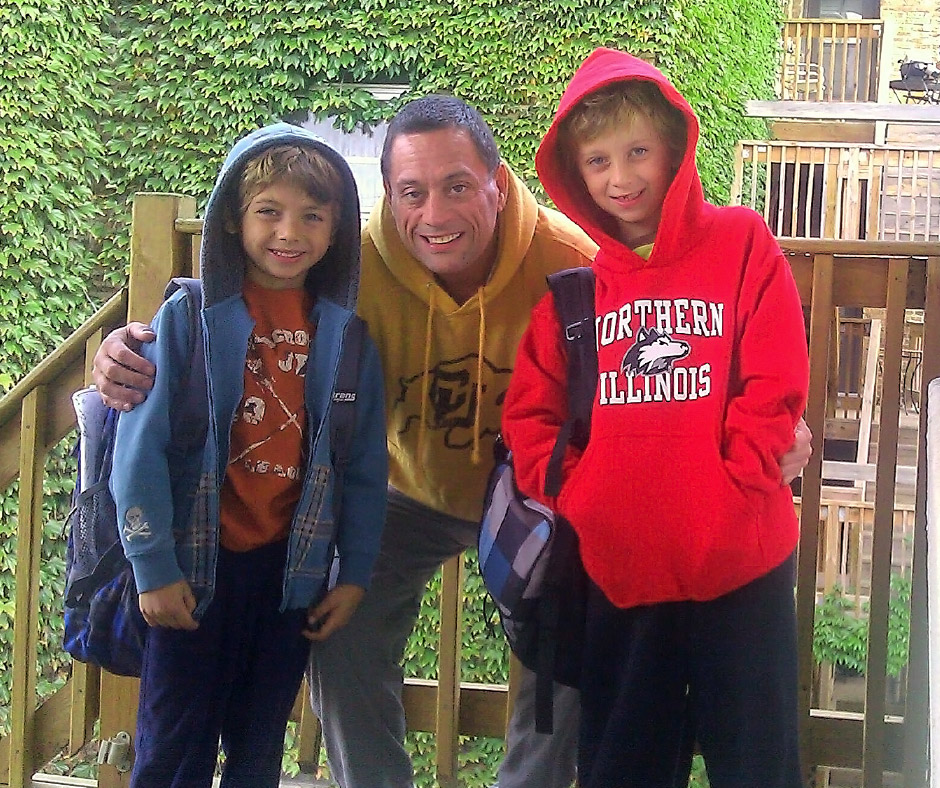 From 2012: Taking my nephews Beni and Christopher to school in Chicago—two of my most important reasons to keep taking my meds!

Andrew Espinosa has taken part in A Day with HIV since the anti-stigma campaign’s start in 2010, submitting a photo nearly every year. His pictures often portray him as the loving uncle with his two nephews, or traveling to meetings of the European AIDS Treatment Group (EATG).

Originally from Chicago, Espinosa graduated from the University of Colorado on an ROTC scholarship, joining the U.S. Air Force. Following his service he lived 15 years in Europe, settling in Poland. During that time he learned he was living with HIV. It was then that he became an advocate, joining the EATG, and continues to serve as a supporting member. Espinosa currently lives in Boulder, where he is vice president of the board of directors of the Boulder County AIDS Project, but frequently returns to Chicago to spend as much time as he can with his family.

Andrew has devoted a large part of his life to fighting HIV stigma and improving the lives of those affected. He has worked as a health educator in the Emergency Department at Mount Sinai Hospital in Illinois and helped implement routine HIV testing programs as a Training Specialist at the Midwest AIDS Training & Education Center (MATEC). Inspired by his passion and dedication, Positively Aware reached out to Andrew to learn more about his personal experience with HIV.

What is it that drives you to take and submit your photo for A Day with HIV?

Andrew:  I think that it is really important for people successfully living with HIV, to show others that it is possible. As a result, I also believe it will help reduce stigma.

What do you personally enjoy most about viewing other participants’ photos in the campaign?

I simply enjoy seeing the joy and gratitude others and I share about being alive.

They actually do not know yet. They don’t know that I am living with diabetes either. I look forward to talking to them about it someday, educating them and telling them my life story. I also look forward to informing them about the meaning behind A Day with HIV and how our photos help to reduce stigma. Due to the benevolence of some amazing teachers, I have also been able to share my story and discuss prevention with students in schools all over the world for over 22 years. I believe that education is key to curbing this epidemic.

Can you share how you first learned you were living with HIV?

I first learned about my status in Poland after a test that I requested for no particular reason. I had always had mandatory tests in the military, but had not had one in a while. It was a tough day but luckily I had amazing support.  It was 1997 and I was told that there were new treatments coming and that I needed to take care of myself mentally and physically until they were available. Both of those things were difficult to do, but I had an abundance of love and support that kept me going. Luckily, I had access to a clinical trial in 1998 after tests showed that my immune system was declining. Taking Crixivan, ddI and d4T was tough and toxic to my body, but that toxic combination saved my life. There are multiple aspects I am grateful for: The test, the timing of drug development, the work of activists, the sacrifice of those in early drug trials, access to a clinical trial, a great healthcare team in Poland, being open about my status, and the love and support from my family and friends. I also believe becoming involved with the EATG, Test Positive Aware Network [TPAN], the AIDS Foundation of Chicago, and the Boulder County AIDS Project, all played a role in saving my life. I have been very lucky and fortunate.

What is your personal experience with stigma?

I have been personally very fortunate not to have experienced much stigma, especially after being open about my status since my diagnosis. There have been a few ignorant and hurtful comments online, but unfortunately that is still out there. Just today, I was talking to an older gentleman and client whom I have known for a while. We discussed my absence next month and how I will be going to Europe for an EATG General Assembly in Sofia, Bulgaria. He asked what the assembly was about and I explained that I have been successfully living with HIV for over 22 years. I also mentioned how the EATG, friends and the community had helped to keep me going through the more difficult times during in the early years. He turned and responded, “So, you are living with AIDS?” I chuckled and proceeded to educate him a bit. Afterwards, he said, “Oh, that’s nice. I’m happy for you.” I thanked him and we went back to work. I wish it could be like that for everyone, but unfortunately it is still not. We still have a lot of work to do in educating others to reduce stigma.

By taking part in A Day with HIV, what message(s) do you want people to receive?

I hope that by taking part and being open about my status, it will help to reduce stigma. I am grateful that, in my experience, combating HIV is much like combating diabetes, it is a manageable disease. That might not be a popular sentiment in the long-term survivor community, but that is my reality with it. Studies show that people aging with HIV will have more age-related conditions and at an earlier age than those who are HIV-negative, and that may make life challenging, but we are living. I hope that we can all be grateful for that fact.

I am living and grateful to still be here. That is my message.

A Day with HIV takes place on Monday, September 23, 2019, and is produced by Positively Aware, the national magazine on HIV treatment and health, published by TPAN in Chicago. Go to adaywithhiv.com.