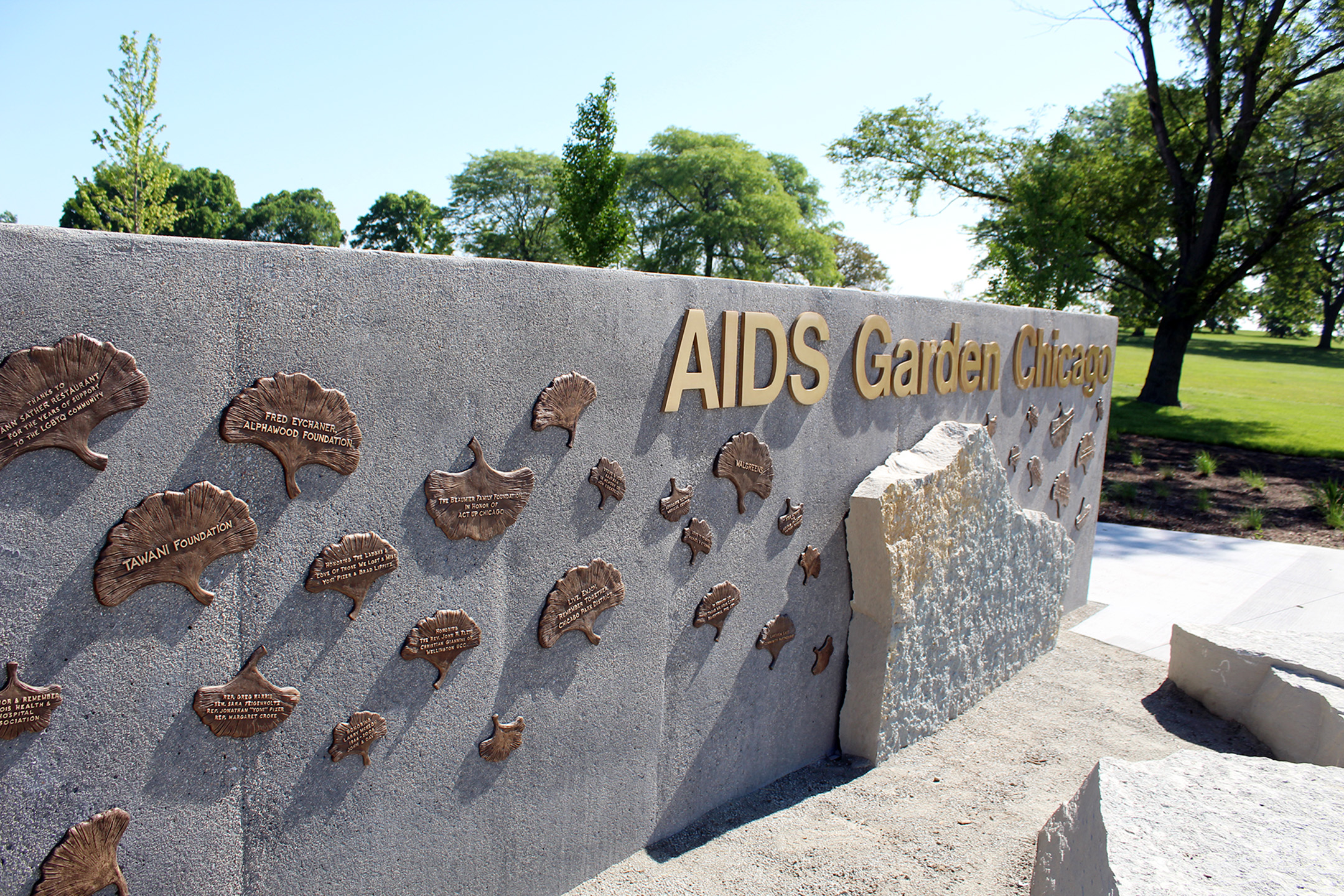 In a day filled with emotion, remembrance, and celebration, AIDS Garden Chicago officially opened June 2 with much fanfare, including a ribbon-cutting ceremony and remarks from some of the city’s dedicated leaders who helped make the vision a reality. The city’s first public monument to memorialize the early days of Chicago’s AIDS epidemic, the 2.5 acre “park with purpose” is built along Lake Michigan just south of Belmont Harbor at the original location of the historic Belmont Rocks, a gathering spot for Chicago’s queer community from the 60’s through the 90’s. A plaque at the entrance reads, in part, “AIDS Garden Chicago is Alderman Tom Tunney’s vision and commitment to honor those lives lost to AIDS, those living with HIV/AIDS today, and all those who love and support them.” 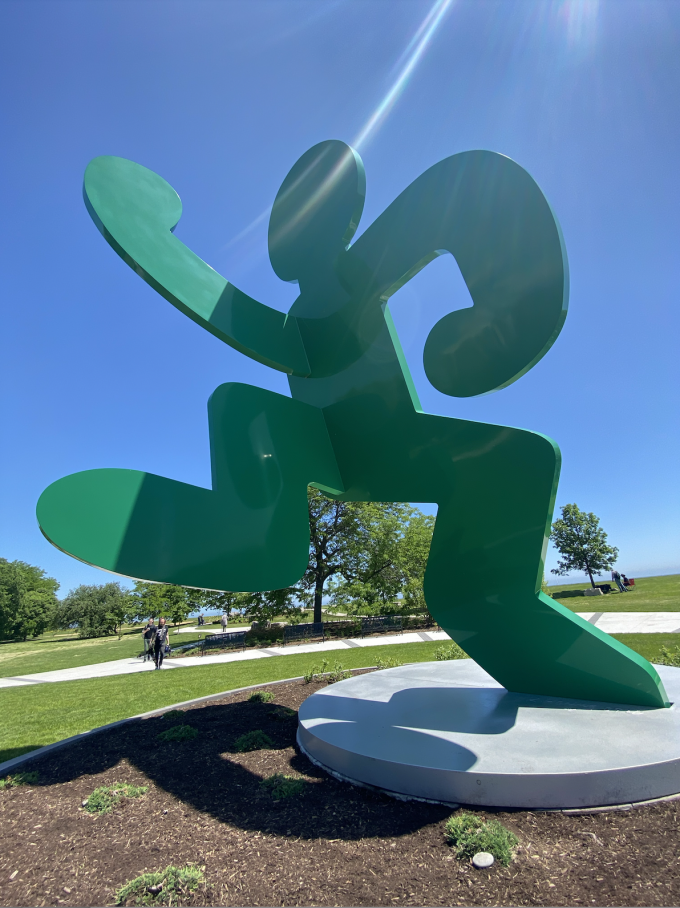 The gate at the park opening is adorned with memorial plaques forged in the shape of leaves, some inscribed with the names of Chicagoans lost to the epidemic. Just beyond the gate the park opens up to a winding path where people can reflect amidst a beautifully landscaped garden. Some of the stones from the original Belmont Rocks are scattered throughout as resting spots along the way. There are stanchions with QR codes that visitors can scan their phones to be taken to a website where stories of the history of the HIV epidemic in Chicago are immortalized, and ever-expanding. The centerpiece of the park is ‘Self-Portrait,’ a 30-foot-tall sculpture by iconic late artist and activist Keith Haring. The sculpture is the only one of its size in existence, and is provided through a generous gift from the Keith Haring Foundation with the support of Rosenthal Fine Art, Inc. The overall effect is a soothing, serene and calm oasis, in the middle of a busy and bustling city. 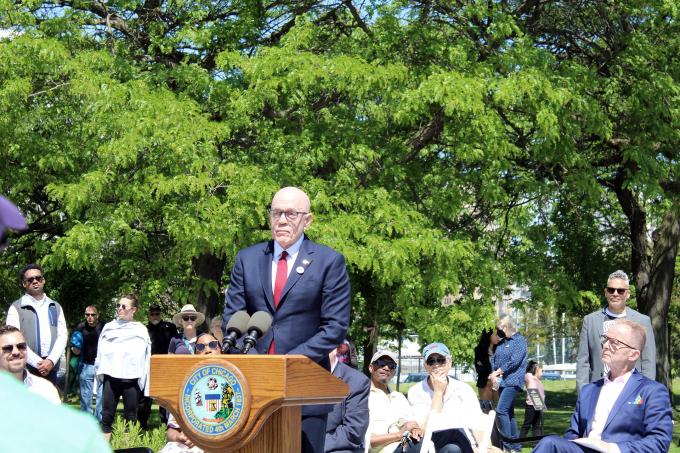 Amid the celebration and commemoration were reminders that, while we’ve come a long way with the rights of LGBTQ+ people and people living with HIV, we still have a long way to go. Illinois House Majority Leader Greg Harris, an openly gay man living with HIV since 1988, reminded those in attendance that we are in danger of losing our hard-fought rights. “They’re not just coming for gays and lesbians this time, they’re coming for trans folks, and LGBT and trans kids,” said Harris. “The same goes for the Supreme Court, attacking the fundamental right to reproductive rights and abortion. The states are fighting healthcare and healthcare expansion for poor folks, voting rights. I know [Alderman] Tom [Tunney] said this can never happen again, but I think this could happen again if we are not vigilant. We’re blessed to live in a state right now where we have elected officials who are recognizing us and supporting our values, but they could be gone in an instant if people do not come out and vote in every election, people who reflect the values of those who gave their lives that this garden stood up for. It’s an honor to be [here for] the memories of those who can’t be with us.”

Chicago Mayor Lori Lightfoot shared her own personal connection to the Rocks. “I came to Chicago in the mid-eighties trying to find my own place in the world but not yet living openly,” said Lightfoot. “After coming out in law school, I found my identity in this city, and this spot really means a lot to me personally. I came here after my first Pride parade, and I was amazed to see what felt like a sea of beautiful, diverse humanity, hanging out, dancing, playing music, barbequing. I’d never seen or experienced anything like that before. It gave me a sense of assurance that I was making the right decision by coming out and embracing who I was, something I’d known since I was a child but finally having the courage to say this is who I am, this is the life I’m going to lead, and I’m never going to look back, I’m always going to look forward, it was an incredible time.”

But, says Lightfoot, just as she has fond memories of this beautiful place, she has horrific ones living through the height of the epidemic. “I felt like I was a kid, watching this thing unfold, I was pretty young, in my teens and early twenties at the height of the AIDS epidemic, and probably the thing that I remember most about that horrific time was being in New York at the Pride Parade and watching New York ACT UP go by and chant, how many more have to die? How many more have to die? I will never forget the feeling that I had, and the feeling I have now, which is chills, but also feeling helpless. How this could be happening, how could the government be ignoring what was devastating our community, and particularly gay men, all across the country? And the level of hatred that we heard being spewed by people, that this was God’s will, that he was invoking his wrath on us because of our lifestyle.”

Lightfoot went on to highlight some of the things her administration is doing, particularly in those communities hardest hit—Black and Brown Chicagoans. Chicago Department of Public Health’s efforts to combat HIV centers on two overarching objectives outlined in the State of Illinois’ Getting to Zero plan, according to the Mayor. “First, is continuing programming for people living with HIV so they can live long, healthy lives. Second, we are laser focused on reducing new HIV transmissions through treatment and pre-exposure prophylaxis, or PrEP. These approaches taken together will lead us finally to the end of this epidemic. In addition, we are strategically investing our resources to accelerate the progress with more than 40 million dollars in funding this year, and we have implemented a portfolio of programs that prioritize residents that are most impacted by HIV. Specifically, our Black and Latinx residents on the South and West sides.”

Lightfoot said she's proud that Chicago was the first jurisdiction in the country to move to a status neutral approach, meaning that residents regardless of their HIV status have access to the same services for mental health, healthcare, substance use disorders, and supportive housing. “That’s a big step,” says Lightfoot. “Moreover, we created one of the first housing programs for Black and Latinx gay and bisexual men who are HIV negative and use PrEP. Since the launch of the program in 2019, all participants in the program have remained HIV negative.”

In closing, Mayor Lightfoot said, “Many of you know, this fight continues. Many are aware that the draft opinion issued by the Supreme Court has our name all over it. We have to be ready, we have to be prepared, and we cannot think that ending Roe only affects straight, white women. The fundamental premise of Roe, which is the right to privacy, directly impacts the rights that we have been able to enjoy, the right to marry, the right to have children, so many other things that are connected to who we are that we take for granted as a community, are at risk when Roe falls. So be ready, folks, support the advocacy groups, whether it’s Lambda, NAACP, ACLU, Equality Illinois, we need to be ready, and not let things happen to us. And just to underscore the point, when they are attacking trans children—children, folks—that should tell you the fight that’s coming to our doorsteps, and we absolutely can’t sit this one out, we’ve got to be ready. We’re lucky in this city, and in this state, that we have our rights intact, and they’re not directly threatened, but our brothers and sisters in our communities all around the Midwest, and the United States, particularly in the southern states, Chicago has to remain a beacon of hope and light for each and every one of them. So, as we celebrate Pride month and celebrate all of the things that we’ve gained, we also have to make sure that we’re reaching out our hand in friendship, to so many in our community across the country who are under threat and siege every single day, by right-wing, unhinged, lunatic governors, legislatures, and others, that want to strip us of our rights, for political sport. We’ve got to stand up loud and proud and say, no, we’re not going back, not this time, we will not let you win.” 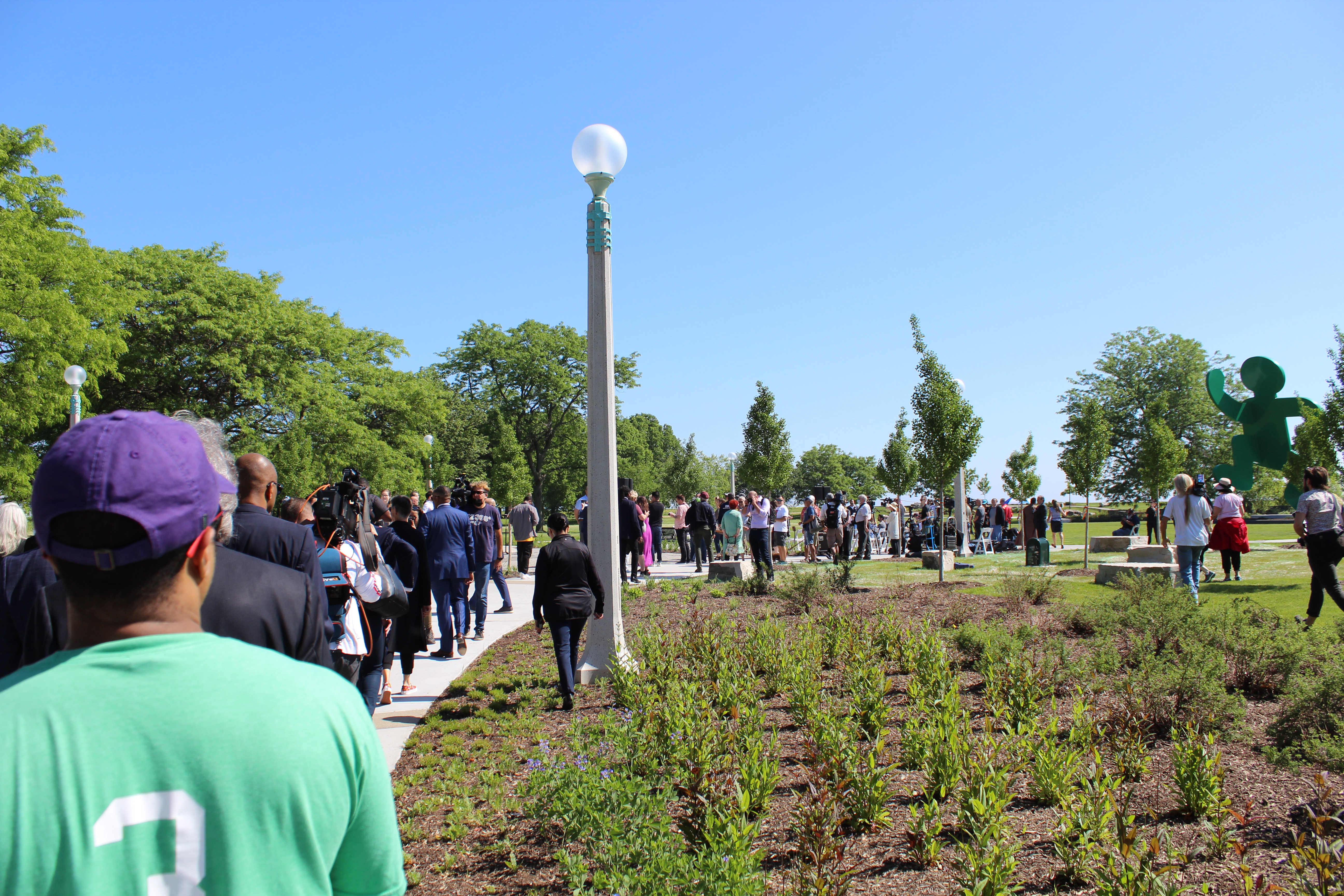 Illinois Governor J.B. Pritzker gave the dedication, saying, “It’s in Keith Haring’s spirit, and in memory of every life lost in Chicago to HIV and AIDS, we dedicate this garden, hallowed ground that we stand upon. Activists like Keith, a powerful story in the AIDS Garden Chicago’s story archive, whose tireless work to raise awareness and destigmatize HIV, brought us closer to winning the fight against AIDS. Today we recommit ourselves to continuing their good and necessary work—by God, we will get to zero.

“This garden is considered a park with a purpose, and it is just that. This is an historic place, a place of joy, a place of remembrance, a park that sometimes feels like a time capsule to the early days of the LGBTQ+ movement, where the community gathered to live proudly and openly as all people deserve to. There’s so much history that we all carry with us in this movement, many years ago before Equality Illinois was Equality Illinois there was the Chicago Federation of Human Rights, and the Pride march was a protest march. There weren’t the rights that we enjoy today, and the elected officials that stand up for the rights of the LGBTQ+ community that we have now. I’m very proud to have been part of that many years ago, to have continued my advocacy for these many years, and to now stand with great leaders like the Mayor, like the Alderman, like so many of our state reps and state senators who stand up for this community.

“The path here, that visitors walk, allows us to reflect on the progress that the LGBTQ community has made, and reminds us of how much further we have to go. At a time when states across the nation are taking away rights, and criminalizing LGBTQ+ families, and communities, we are here in Illinois, in the land of Lincoln, in the land of the free, to uplift the queer community, and to ensure that this state stands up for LGBTQ rights, no matter what. With members of the general assembly, together I’m very proud that we were able to dedicate $1.5 million and that was critical legislation, to make Illinois a safer and more inclusive state where everyone is treated with dignity including those with HIV. I’m excited, I truly am, to celebrate the progress made, but I know our work isn’t done. As we stand here, AIDS Garden Chicago holds in it both the immeasurable losses sustained by the epidemic, as well as the vibrant and powerful hope of this community. With our collective and affirming vision, people of this city and our state recommit ourselves to living up to the values, and the pride, represented by this beautiful landmark.”