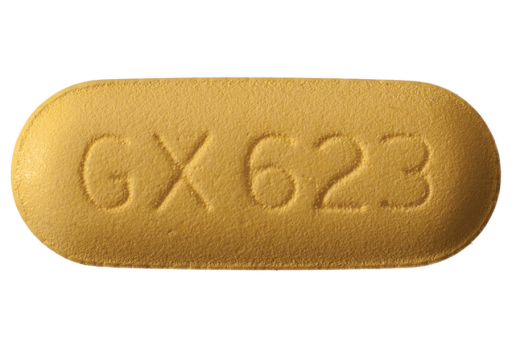 Two 300 mg tablets once daily (or one 300 mg tablet twice daily), without regard to food. For adults and children at least 3 months of age and older. In children Ziagen is dosed based on body weight. See package insert for weight-based dosing. Tablets may be crushed or split and added to a small amount of semi-solid food or liquid. Ziagen is also available as an oral solution (20 mg/mL) (strawberry-banana flavor) for children and adults who are not able to swallow the tablets. Must be taken in combination with another antiretroviral(s).

The length of this section is meant to be informative, not scary. The most common side effects with an incidence greater than 10% were nausea, headache, malaise (general ill feeling), fatigue, vomiting, and dreams/sleep disorders. In pediatric people, the more common side effects were fever and/or chills, nausea and vomiting, skin rashes, and ear/nose/throat infections.

Approximately 8% of people who took abacavir in clinical trials (where screening for HLA-B*5701, a genetic marker associated with abacavir hypersensitivity, was not performed) experienced hypersensitivity reaction (HSR), an allergic-like reaction. To minimize the risk for HSR, a simple blood test for HLA-B*5701 should be done prior to starting a regimen containing abacavir to identify people at higher risk for this reaction. This test is covered by most insurance and also by LabCorp/ViiV (go to viivconnect.com). If the HLA-B*5701 test is positive, you are at increased risk for HSR, and should not take abacavir. An allergy to it should be entered in your medical record. A negative HLA-B*5701 test does not mean you won’t have an HSR, but the risk is very low (1% from clinical studies). Symptoms of HSR usually include some combination of the following: fever, skin rash, malaise (general ill feeling), severe nausea, headache, muscle ache, chills, diarrhea, vomiting, abdominal pain, respiratory symptoms (cough, difficulty breathing, sore throat), and/or joint pain. Symptoms are listed on the patient information sheet and warning card that you receive each time you fill your prescription. You should keep the warning card with you. HSR might be confused with flu, but symptoms of HSR usually worsen, very slowly, and with every dose.

People who think they are experiencing HSR must be evaluated by an experienced HIV provider right away before they stop taking abacavir. Do not use a skin patch test to confirm HSR. Symptoms usually resolve after permanent discontinuation. If you develop HSR, abacavir should be stopped and you can never take abacavir or any product containing abacavir (Epzicom, Ziagen, or Triumeq) again (starting again is called rechallenging). Rechallenging can cause a rare life-threatening reaction. This does not apply to a missed dose when there is no HSR, but talk with your healthcare provider and watch for symptoms if you’ve stopped the drug for a few days, preferably under the observation of others who can call for medical help if you develop symptoms. An HSR can technically occur at any time, regardless of how long you have been taking the medication; however, it is much more likely to occur when you start (or re-start) the medication (90% occur within the first six weeks of treatment).

Some large observational studies suggest abacavir may increase the risk of cardiovascular events, including myocardial infarction (MI, or heart attack), in people with risk factors (such as older age, smoking, diabetes, uncontrolled high blood pressure, high cholesterol, family history of heart disease, and drug use), especially within the first six months of therapy. However, other studies, including a large meta-analysis, have shown no increase in cardiovascular risk.

To date, no absolute consensus has been reached on the association of abacavir with cardiac risk, although theoretical contributing mechanisms have been described. People who are at high risk for heart disease should discuss risks with their provider and they should be monitored more closely.

The ACTG A5202 study found that abacavir/lamivudine (Epzicom) was inferior to tenofovir/emtricitabine (Truvada) in getting people undetectable when their pre-treatment viral load was over 100,000 copies/mL. However, when combined with Tivicay (dolutegravir), Epzicom performed just as well as Truvada in people with high viral loads (over 100,000 copies/mL). Hence, Triumeq is the only abacavir-containing regimen recommended by DHHS as initial therapy for most HLA-B*5701-negative people. It is recommended that people with symptoms of acute respiratory disease consider HSR even if another diagnosis such as pneumonia, bronchitis, or flu is possible. But again, a simple test reveals whether you are at high risk for the allergic reaction. FDA researchers reported finding a mechanism for autoimmune drug reactions, including abacavir HSR, and hope it helps improve drug safety in the future. Ziagen as part of the combination tablet Epzicom is recommended by DHHS as one of the preferred NRTI combination components of an ART regimen during pregnancy, and as a preferred backbone drug in combination with lamivudine (Epivir) or emtricitabine (Emtriva) for pediatric use in ages one month and older. With abacavir recommended as a preferred drug for pediatrics, DHHS moved zidovudine from the “Preferred” list to the “Alternative” list last year for this population. Pregnant individuals can voluntarily enroll in the Antiretroviral Pregnancy Registry through their provider; go to apregistry.com.

One of the older drugs still in use, abacavir is generally paired with 3TC as a nuke backbone (Epzicom) and is part of the STR Triumeq. Before starting abacavir, a blood test for HLA-B*5701, a genetic marker, should be done to identify people who should not take the drug because of high risk for a potentially life-threatening hypersensitivity reaction. Since using this test, abacavir hypersensitivity is uncommonly seen. If you have ever had abacavir hypersensitivity, you should never take abacavir again, and be sure your medical chart is marked for “allergy” to abacavir.

Abacavir continues to be useful for people who can’t take TDF because of kidney problems or osteopenia/osteoporosis. However, abacavir was associated with increased risk for cardiovascular disease in some, but not all, large observational studies. The FDA considers the risk to be “inconclusive,” but the DHHS guidelines recommend avoiding abacavir in persons with, or at high risk for, cardiovascular disease.

Ziagen (abacavir, approved in 1998) is an NRTI that is recommended for most people starting ART for the first time in combination with the NRTI Epivir (lamivudine) and the INSTI Tivicay (dolutegravir), as Triumeq. Ziagen cannot be taken by people who have a certain gene that makes them more likely to have a life-threatening allergic reaction to abacavir (your doctor will test you for the gene before prescribing Ziagen). Some studies have found increased rates of heart disease among people on Ziagen. Even though Ziagen is a component of an ART regimen that is recommended by current guidelines, there are a number of other options that are just as effective, tolerable, and convenient, and may be safer. If your provider recommends a Ziagen-containing regimen, they may well have a good reason, but make sure they tell you what it is.