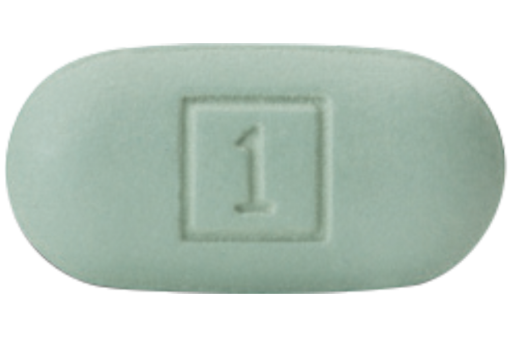 One tablet once daily with food. For people taking HIV therapy for the first time (treatment-naïve) or people with suppressed viral load on a stable HIV regimen for at least 6 months who have no known resistance to the elvitegravir, emtricitabine, or tenofovir components of the regimen. Tablet contains 150 mg of the INSTI elvitegravir boosted by 150 mg cobicistat plus 200 mg emtricitabine and 300 mg tenofovir DF (TDF).

Take missed dose as soon as possible, unless it is closer to the time of your next dose. Do not double up on your next dose. Dose cannot be adjusted for people with kidney or liver problems. Stribild should not be started by individuals with estimated CrCl less than 70 mL/min and should be discontinued if CrCl decreases to less than 50 mL/min. Stribild is not recommended for patients with severe liver problems, or during pregnancy.

Common side effects reported in 10% or more of study participants include nausea and diarrhea. Other less common side effects include abnormal dreams and headache. New data associate INSTIs and TAF with weight gain; see “More information,” and go to positivelyaware.com/articles/weighty-concerns and positivelyaware.com/articles/fatty-tissues. The TDF in Truvada is associated with long-term decreases in bone mineral density (BMD). BMD monitoring should be considered for people who have a history of bone fracture due to disease or are at risk for osteopenia or osteoporosis.

While calcium and vitamin D levels can be checked to assess the need for these supplements, talk with your provider before starting on your own. Before taking Stribild, kidney function testing should be conducted, including serum creatinine, serum phosphorus, urine glucose, and urine protein. These measurements should continue to be monitored while taking Stribild. Cobicistat can cause a small, reversible increase in serum creatinine within the first few weeks of treatment that does not affect actual kidney function (see Tybost for more information). There have been rare reports of depression and suicidal ideation, primarily in patients with a history of psychiatric illnesses, in people receiving INSTI-based regimens. Prior to initiation, people should be tested for hepatitis B virus (HBV) infection. Severe exacerbations of hepatitis B have been reported in people co-infected with hepatitis B who have discontinued Stribild (due to elimination of the emtricitabine and TDF components, which also treat HBV). Monitor liver enzymes closely in people co-infected with hepatitis B and, if appropriate, initiation of anti-hepatitis B therapy may be warranted upon Stribild discontinuation. Call your health care provider right away if you develop any of the following signs or symptoms of hepatitis: yellowing of the skin or whites of the eyes; dark or tea-colored urine; pale-colored bowel movements; nausea or vomiting; loss of appetite; or pain, aching, or tenderness on the right side below the ribs.

Do not take with Cimduo or Temixys, Descovy, Emtriva, Epivir-HBV, Hepsera, Truvada, Vemlidy, or Viread, all used for the treatment of hepatitis B. Separate by at least 2 hours from antacids containing aluminum, magnesium hydroxide, or calcium carbonate. Stribild is safe to take with other medications used for heartburn and GERD, such as Aciphex, Dexilant, Nexium, Pepcid, Prevacid, Prilosec, and Zantac. Do not take Stribild with alfuzosin, carbamazepine, phenobarbital, phenytoin, ergotamine, dihydroergotamine, methyl-ergonovine, oral midazolam, pimozide, Revatio, rifampin, rifabutin, rifapentine, Serevent, triazolam, or St. John’s wort.

An alternative corticosteroid to systemic dexamethasone should be considered. No significant interactions with beclomethasone or prednisolone. Risks versus benefits of using Stribild and voriconazole together should be assessed with expert consultation. Do not use with lovastatin or simvastatin (Advicor, Altoprev, Mevacor, Simcor, Vytorin, and Zocor). Cholesterol-lowering drugs such as rosuvastatin and atorvastatin should be used with caution and started at the lowest dose possible. Monitor closely for increased side effects from these medications, such as muscle pain. Concentrations of antidepressants such as fluoxetine, paroxetine, bupropion, or amitriptyline may be increased by Stribild, and their doses may need to be reduced. Use with caution and therapeutic monitoring, if available, for antiarrhythmic drugs such as digoxin. Stribild increases levels of many nasal and inhaled steroids such as fluticasone, which may lead to symptoms of Cushing’s syndrome. An alternative corticosteroid to fluticasone is recommended. Use caution with beta blockers and calcium channel blockers. Cialis, Levitra, and Viagra levels are increased; doses should not exceed 10 mg Cialis, or 2.5 mg Levitra per 72 hours, or 25 mg Viagra per 48 hours.

Monitor for increased side effects of these medications, such as visual disturbances. Effectiveness of oral contraceptives may be decreased; consider using alternative or additional contraception methods. Co-administer bosentan and immunosuppressants such as Prograf, Gengraf, Neoral, and Sandimmune with caution. Start metformin at lowest dose and titrate based on tolerability and clinical effect. Reduce Daklinza dose to 30 mg. Taking with Harvoni, Olysio, Viekira Pak, or Zepatier is not recommended. Monitor kidney function more closely with Epclusa. Tell your provider or pharmacist about all medications, herbals, and supplements you are taking or thinking of taking, prescribed or not, as there are many other drug interactions not listed here.

Weight gain is increasingly recognized as a potential side effect of INSTIs. In the community, enlargement of the stomach and waist area can be distressing. According to the DHHS HIV treatment guidelines, “Weight gain has been associated with initiation of ART [antiretroviral therapy] and subsequent viral suppression. The increase appears to be greater with INSTIs than with other drug classes.

Greater weight increase has also been reported with TAF than with TDF, and greater with DOR than EFV.” Other factors have been associated with weight gain in addition to medication used, including race, sex, and previous overweight status. No word yet if it is reversible, but the race is on to find more answers. Stribild is not recommended for use during pregnancy due to substantially lower exposures of cobicistat and elvitegravir during the second and third trimesters as well as reports of viral breakthrough. Switching regimens should be considered for pregnant women already taking this regimen.

Stribild was the first four-drug INSTI regimen to be approved for treatment. Like Genvoya, it contains cobicistat-boosted elvitegravir and emtricitabine, but with TDF. Also, like Genvoya, it is no longer recommended for initial therapy for most persons, largely because of the drug-drug interactions and lipid effects of cobicistat, and the genetic fragility of elvitegravir. Notably, boosting has been shown to exacerbate toxicities of TDF.

Because both TDF and TAF are recommended NRTIs, Genvoya and Stribild are treated as equals by the DHHS guidelines, although they might be used in different populations because of their side effects.

Although INSTIs are associated with more weight gain than PIs and NNRTIs, elvitegravir is associated with the least weight gain among INSTIs. The inclusion of TDF in Stribild likely decreases weight, so it counterbalances INSTI effects to some degree.

Stribild cannot be used in pregnancy because of inadequate drug levels associated with cobicistat.

Stribild still carries a high price tag, in spite of containing TDF, which is now generic.

If taking Stribild, you should have baseline kidney function testing done, and monitor throughout its use. The tenofovir DF component also means bone density testing is a good idea. Stribild needs to be taken with food. You and your clinician should keep an open dialog about other medications prescribed to avoid drug to drug interactions.