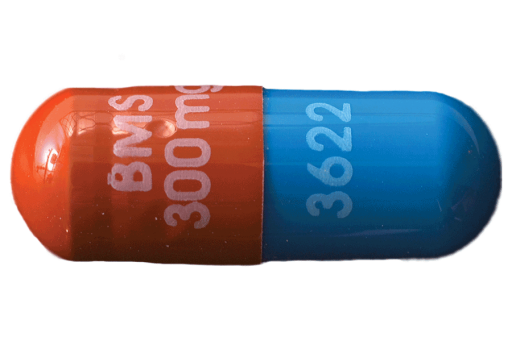 Recommended as component of initial regimen in certain clinical situations

For most treatment-naïve (first time on HIV therapy) and treatment-experienced individuals, the dose is one 300 mg capsule plus 100 mg Norvir or 150 mg Tybost once daily with food. Must be taken in combination with another antiretroviral(s) which does not contain this drug or medication from the same drug class. See package insert for dosing recommendations during pregnancy, liver or kidney impairment, and with certain drug interactions. Capsules also available in 150 mg and 200 mg. Take Norvir or Tybost at same time as Reyataz. Pediatric dose with 50 mg oral powder available based on body weight for children at least 3 months of age weighing at least 11 pounds (5 kg).

Take missed dose as soon as possible, unless it’s closer to the time of your next dose. Do not double up on your next dose. Swallow capsules whole—do not open or mix with anything. Oral powder may be used by adult patients who cannot swallow the capsules.

Most common side effects may include nausea, ocular icterus (yellowing of the skin or eyes as a result of increased bilirubin levels), jaundice, and rash. The ocular icterus and jaundice was reversible on discontinuation of the drug. Other less common side effects may include kidney stones, gallstones, abnormal heart rhythm, and elevated liver enzymes (more common in people with hepatitis B or C). Capsules do not contain phenylalanine but oral powder does; thus use with caution in individuals with phenylketonuria (PKU). Kidney laboratory testing should be performed in all patients prior to initiation of Reyataz and continued during treatment. Renal laboratory testing should include serum creatinine, estimated creatinine clearance, and urinalysis with microscopic examination. Rarely, chronic kidney disease has been observed. A cross-sectional cohort study reported Reyataz with Norvir was associated with less progression to atherosclerosis (a symptom of cardiovascular disease). Large observational cohorts found an association between some PIs (DRV/r, FPV, IDV, and

Do not use with alfuzosin, rifampin, irinotecan, ergot derivatives, triazolam, oral midazolam, St. John’s wort, Revatio, or Viramune (nevirapine). Do not use lovastatin, simvastatin, or co-formulations containing them (Advicor and Vytorin) for treatment of high cholesterol. Alternatives for these are atorvastatin, rosuvastatin, pravastatin, pitavastatin, and fluvastatin, but should be used with caution and started at the lowest dose possible; monitor for increased side effects. Proton pump inhibitors (PPIs, like Aciphex, Dexilant, Nexium, Protonix, and Prevacid) and H2-receptor antagonists (H2RAs, like Pepcid, Zantac, and Tagamet) can stop Reyataz from being absorbed. Treatment-experienced people should not take PPIs while on Reyataz. H2RAs like Pepcid may be taken (no more than 20 mg twice a day if treatment-experienced or 40 mg twice a day if treatment-naïve) at the same time as Reyataz/Norvir or at least 10 hours later. When taking Reyataz without Norvir, the dose can be taken at least two hours before or at least 10 hours after an H2RA. If taking chewable antacids like Rolaids and Tums, take Reyataz with food two hours before or one hour after. Treatment-experienced people should not take Reyataz with Sustiva. Viread decreases the levels of Reyataz and Reyataz/Norvir increases Viread levels; monitor for adverse events. Reyataz can be taken unboosted with Epzicom if necessary. Bepridil, amiodarone, quinidine, and lidocaine should be used cautiously because of the risk of worsening abnormal heart rhythm. Close monitoring is required when used with warfarin. Calcium channel blockers should be monitored. Use caution when using the antifungals itraconazole or ketoconazole. Voriconazole is not recommended. Reducing dose and frequency of rifabutin to 150 mg every other day or three times a week is recommended. Reyataz + Norvir increases levels of fluticasone (found in Advair, Flonase, and Flovent); monitor for signs of Cushing’s syndrome. An alternative corticosteroid is recommended. Reyataz can be taken with birth control pills that contain no more than 30 mcg of ethinyl estradiol if taking Reyataz without Norvir and at least 35 mcg if taken with Norvir. Use caution with carbamazepine, phenobarbital, and phenytoin. ED drugs should not exceed 10 mg Cialis or 2.5 mg Levitra per 72 hours, or 25 mg Viagra per 48 hours. A lower dose of trazodone is recommended. Use with caution with bosentan, salmeterol, and immunosuppressants, and use lower dose of colchicine. Use with Norvir when taking buprenorphine; monitor for sedation. Do not take with Zepatier. Taking with Olysio is not recommended. Reyataz/Norvir is not recommended with Harvoni if tenofovir DF (TDF, in Truvada) is part of HIV regimen. With Epclusa, monitor for tenofovir toxicities if TDF is part of HIV regimen. Take Reyataz with morning Viekira Pak dose, without Norvir. Tell your provider or pharmacist about all medications, herbals, and supplements you are taking or thinking of taking, prescribed or not, as there are many other drug interactions not listed here.

Yellowing of the eyes and skin is a common reason for discontinuation. Reyataz plus Norvir and 2 NRTIs is still recommended as a preferred regimen during pregnancy. Reyataz plus Tybost is not recommended during pregnancy. Maintaining adequate hydration is important with Reyataz. Reyataz + Norvir + Epzicom is no longer included in the list of “Recommended Initial Regimens in Certain Clinical Situations” because it has disadvantages when compared with other regimens in this category.

See package insert for more complete information on potential side effects and interactions.

Approved in 2003, Reyataz was the first effective and better-tolerated protease inhibitor alternative to the now forgotten Kaletra (a drug credited with saving many PLWH lives in the early 2000s, but loaded with significant side effects). Reyataz can be given with or without a booster (Norvir or Tybost), but it is almost always given with a booster due to better resistance to HIV resistance when taken that way. In a 3-way clinical trial to find the best first-time ART regimen for PLWH, Reyataz + Norvir came in third after both Prezista + Norvir (second) and Isentress (first) due to its greater side effects (nausea, queasiness, diarrhea, and yellow eyes and skin). Reyataz’s use has progressively fallen off over the past several years due to these study results. Of note, Reyataz went off patent (marketing exclusivity) in the summer of 2017 and became available as a generic form of the medication (atazanavir) in late December 2017. What effect this new generic, and most likely cheaper, version of Reyataz will have on its use will probably be minimal.

Compared to previous PIs, Reyataz has a friendly lipid profile, eliminating any worries about metabolic complications. Drug interactions are a concern. Acid reflux medications can interfere with the absorption of atazanavir. With atazanavir there is an increase of bilirubin that, although not harmful, causes yellowing of the eyes and skin. Watch the kidneys and the liver.