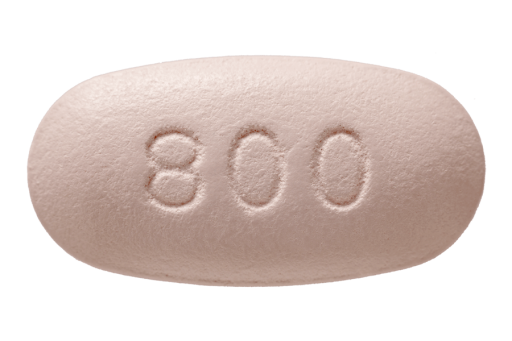 One tablet (800 mg of the PI darunavir boosted by 150 mg cobicistat) once daily with food, in people with no darunavir-associated drug resistance, including both treatment-experienced individuals and those who are treatment-naïve (taking HIV therapy for the first time). Must be taken in combination with another antiretroviral(s) which does not contain the medications in this drug or medication from the same drug classes.

Prezcobix is for adults and children weighing at least 88 pounds (40 kg). Prezcobix is only available for people taking darunavir once daily, not those who require darunavir twice daily (see Prezista). It is not recommended to co-administer Prezcobix with tenofovir disoproxil fumarate (brand name Viread, found in Truvada), with creatinine clearance (CrCl) less than 70 mL/min (a measure of kidney function). See “More information” for CrCl information.
Take missed dose as soon as possible, unless it is closer to the time of your next dose. Do not double up on your next dose. Prezcobix is not recommended during pregnancy due to substantially lower exposures of darunavir and cobicistat during pregnancy. Do not use in people with severe liver impairment.

Darunavir (which is in Prezcobix) contains a sulfa component, and should be taken with caution by people with a known sulfonamide allergy. The most common side effects reported in at least moderate severity by 5% or more of study participants were diarrhea, nausea, rash, headache, abdominal pain, and vomiting. Cobicistat can cause a small, reversible increase in serum creatinine (SCr, which indicates the eGFR or estimated CrCl lab values) within the first few weeks of treatment without affecting actual kidney function (see Tybost for more information). Patients experiencing a confirmed increase in serum creatinine of greater than 0.4 mg/dL from baseline should be closely monitored for renal safety. Serum phosphorus in patients with or at risk of kidney impairment should also be monitored. Kidney impairment—including cases of acute kidney failure and Fanconi syndrome—has been reported in patients taking both cobicistat and Viread (tenofovir DF or TDF, also found in Truvada).

When used with TDF, a baseline CrCl, urine glucose, and urine protein is needed. While very rare (0.4% incidence), severe rash accompanied in some cases by fever and/or elevations of AST/ALT (liver enzymes), can be life-threatening. Seek immediate medical attention. Observational cohort studies reported an association between some PIs (including darunavir taken with Norvir) and an increased risk of cardiovascular (CV) events. Data with darunavir plus cobicistat are too limited to make these conclusions. Although some older PIs have been associated with liver toxicity, lactic acidosis, diabetes, or fat redistribution, these conditions are only rarely, or never, observed with darunavir. With PIs, there can be increased risk for bleeding in hemophiliacs.

Beclomethasone, prednisolone, and prednisone as alternative corticosteroids may be considered, particularly for long-term use. Erectile dysfunction drugs should not exceed 10 mg Cialis, or 2.5 mg Levitra per 72 hours, or 25 mg Viagra per 48 hours. Atorvastatin and rosuvastatin dose should not exceed 20 mg daily. Clinical monitoring is recommended with drospirenone, due to potential for hyperkalemia (higher than normal potassium level in your blood). Do not take with colchicine if there is kidney or liver impairment. Start metformin at lowest dose and titrate based on tolerability and clinical effect. Cannot be taken with Zepatier. Not recommended with Mavyret. Based on its mechanism, drug interactions with other hepatitis C medications are similar to the interactions of Prezista + Norvir. Tell your provider or pharmacist about all medications, herbals, and supplements you are taking or thinking of taking, prescribed or not.

Since Prezista (darunavir) must be used with a pharmacokinetic (PK) enhancer or booster such as cobicistat or ritonavir, this formulation makes for greater convenience, one less pill, and one less co-pay. The resulting co-formulation, however, is rather large in size, but the tablets are designed as an immediate-release formulation, so no potential problem with absorption is anticipated if the tablets are chewed, split, or crushed. A single-tablet, once-daily regimen containing darunavir/COBI/FTC/TAF is available (see Symtuza). Darunavir is recommended as part of an initial regimen “in certain clinical situations” in DHHS guidelines.

DHHS wrote this is “in part because of greater tolerability” with the integrase inhibitor medications compared to Prezista + Norvir or Prezcobix. According to the guidelines, “An example of a situation in which a darunavir-based regimen may still be preferred is when a high genetic barrier to resistance is particularly important, such as when there is substantial concern regarding a person’s adherence or when antiretroviral therapy (ART) should be initiated before resistance test results are available [go to hivinfo.nih.gov].” Examples of people needing to start treatment immediately before resistance test results are available include newly diagnosed individuals and those who are experiencing certain opportunistic infections (an indication of advanced disease). Doctors regularly prescribe Prezcobix for patients with a CrCL less than 30 mL/min and for patients on dialysis, although the label has not been updated with new data after Prezcobix came to market. There are no pharmacokinetic data available with Prezcobix in renal impairment or end-stage renal disease.

Darunavir/cobicistat and Evotaz were the first coformulated boosted PIs to hit the market since Kaletra. It is recommended for initial treatment when INSTIs can’t be used, and can be paired with TAF/FTC, TDF/FTC, and ABC/3TC.

For side effects and drug interactions, see also Prezista and Tybost.

Prezcobix should not be used during pregnancy because of insufficient drug levels associated with cobicistat.

Prezcobix needs to be taken as part of a cocktail ART regimen with other HIV medications. Take once daily with food, and try not to skip doses. Prezcobix does, however, have a high barrier to resistance should there be doses missed. Other drugs can affect the metabolism of Prezcobix, so discuss all medications taken with your clinician.