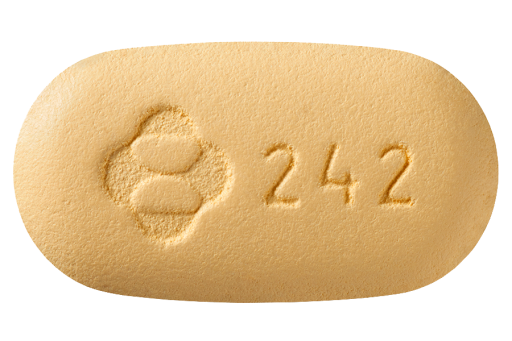 Recommended as a component of initial regimen for most people

Isentress HD: Two 600 mg film-coated tablets once daily for individuals new to HIV therapy (treatment-naïve) or who are virologically suppressed (have undetectable viral load) on an initial regimen containing Isentress.

Isentress: One 400 mg film-coated tablet twice daily for people with HIV treatment experience; this Isentress dose may also be taken by those new to HIV therapy.

Must be taken in combination with another antiretroviral(s) which does not contain this medication or medication from the same drug class.

Isentress may cause elevated levels of creatine kinase (a muscle enzyme). Inform your provider or pharmacist if you have a history of rhabdomyolysis, myopathy, or increased creatine kinase, or if you also take medications that may contribute to these conditions such as statins, fenofibrate, or gemfibrozil. INSTIs have been associated with adverse neuropsychiatric effects in some retrospective cohort studies and case series. The DHHS guidelines recommend closely monitoring people with pre-existing psychiatric conditions on an INSTI. Chewable tablets contain phenylalanine, which can be harmful to patients with phenylketonuria.

It is important to take Isentress HD and Isentress only with other HIV drugs recommended by your provider because they and similar drugs are contained in other HIV medications: Biktarvy, Genvoya, Stribild, Tivicay, Triumeq, Dovato, and Juluca. Isentress HD cannot be used with rifampin, but Isentress can; increase Isentress to 800 mg twice daily when using rifampin. Remember to decrease the raltegravir back to its original dose when you finish taking rifampin. There are no data on dosing of the chewable tablets with rifampin. There is no need to increase the raltegravir dose with rifabutin. With both Isentress HD and Isentress, avoid Gaviscon and other antacids containing aluminum or magnesium. Calcium-containing antacids like Tums (calcium carbonate) can be used with Isentress, but not Isentress HD. Other acid reducers (such as Pepcid, Zantac, Prilosec, and Prevacid) are okay to use. Raltegravir is not recommended with carbamazepine or phenobarbital. Raltegravir can be used with Harvoni, Zepatier, or Epclusa. Unlike Isentress, Isentress HD cannot be used with Intelence or boosted Aptivus. Tell your provider or pharmacist about all medications, herbals, and supplements you are taking or thinking of taking, prescribed or not, as there are other drug interactions not listed here.

Isentress HD was approved in 2017. While the original formulation, Isentress, was well tolerated and highly effective, its twice-daily dose was seen by some as a small inconvenience. According to DHHS HIV treatment guidelines, most INSTIs on the market are recommended as components of initial ART regimens for most people; Isentress HD has been added to this list. Raltegravir-based regimens may be preferred for patients with high cardiovascular risk. Weight gain is being more commonly recognized as a side effect of INSTIs. In the community, enlargement of the stomach and waist area can be distressing. According to the DHHS HIV treatment guidelines, “Weight gain has been associated with initiation of ART [antiretroviral therapy] and subsequent viral suppression. The increase appears to be greater with INSTIs than with other drug classes. Greater weight increase has also been reported with TAF than with TDF, and greater with DOR than EFV.” Other factors have been associated with weight gain in addition to medication used, including race, sex, and previous overweight status. There is no word yet on reversibility, but the race is on to find more answers. Isentress is the preferred INSTI medication in HIV treatment guidelines for pregnancy, 400 mg twice a day in combination with 2 NRTIs. In pediatric HIV guidelines, Isentress was downgraded in 2017 from “preferred” to an “alternative” part of an initial regimen for children ages 6–12.

Isentress has been associated with more weight gain than boosted atazanavir, darunavir, or elvitegravir, but less than dolutegravir.

Calcium, magnesium, zinc, aluminum, and iron supplements can lower levels of INSTIs and dosing recommendations should be observed.

Isentress HD and Isentress are integrase inhibitors. The generic name is raltegravir. They can be used for treatment-naïve persons, as well as treatment-experienced individuals who have multi-drug resistance and have not taken an integrase inhibitor before. Dosing for Isentress HD (600 mg) is two pills once a day, and for Isentress (400 mg) one pill twice a day. Other uses include being part of a PEP (post-exposure prophylaxis) treatment and as an oral or chewable tablet for children. If you develop a rash from Isentress, discontinue use and contact your clinician.