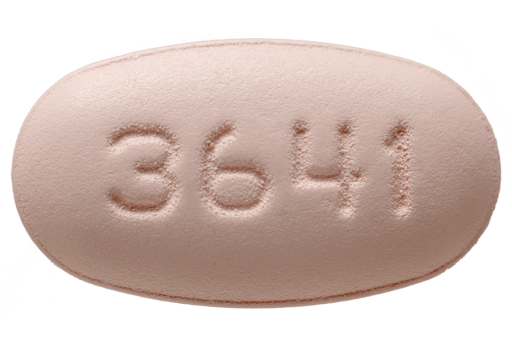 One tablet once daily with food. Each tablet contains 300 mg of atazanavir boosted by 150 mg cobicistat. Must be taken in combination with another antiretroviral(s) which does not contain the medications in this drug or medication from the same drug classes. Use with Intelence or Sustiva is not recommended. See “More information” for pediatric dose update.

Not recommended for people with any degree of liver impairment or those who are treatment-experienced and on hemodialysis.

The most common (greater than 10%) side effects reported in clinical trials were nausea, ocular icterus (yellowing of the eyes), and jaundice. The ocular icterus and jaundice were reversible on discontinuation of the drug. Rash has also been reported, though less common. Cobicistat can cause a small, reversible increase in serum creatinine (SCr, which indicates the eGFR or estimated CrCl lab values) within the first few weeks of treatment without affecting actual kidney function (see Tybost for more information).

Patients experiencing a confirmed increase in serum creatinine of greater than 0.4 mg/dL from baseline should be closely monitored for renal safety. Serum phosphorus in patients with or at risk for kidney impairment should also be monitored. Kidney impairment—including cases of acute kidney failure and Fanconi syndrome—has been reported in patients taking both cobicistat and Viread (tenofovir DF or TDF, also found in Truvada). When used with TDF, a baseline CrCl, urine glucose, and urine protein is needed; CrCl, urine glucose, and urine protein should be monitored regularly while taking Tybost-containing regimens. Observational cohort studies reported an association between some PIs (including darunavir, found in Prezista and Prezcobix, and lopinavir/ritonavir, brand name Kaletra) and an increased risk of cardiovascular (CV) events; however, this has not been observed with Reyataz (atazanavir, or ATV), found in Evotaz. Another observational cohort study of predominantly male participants found a lower rate of cardiovascular events in those receiving atazanavir-containing regimens compared with other regimens. Further study is needed.

Cobicistat interacts with many drugs, because as a booster it inhibits liver enzymes involved in drug metabolism. Note—Tybost is not interchangeable with Norvir. Do not take with ergot derivatives, triazolam, oral midazolam, lurasidone, pimozide, Revatio, simvastatin, lovastatin, St. John’s wort, Viramune, alfuzosin, ranolazine, rifampin, dronedarone, or irinotecan. Do not take with colchicine if there is kidney or liver impairment. Proton pump inhibitors (PPIs, like Aciphex, Dexilant, Nexium, Prilosec, Protonix, and Prevacid) and H2-receptor antagonists (H2RAs, like Pepcid, Zantac, and Tagamet) can stop atazanavir from being absorbed. Treatment-experienced people should not take PPIs while on atazanavir. See package insert for antacid dosing adjustment recommendations. If taking chewable antacids such as Rolaids and Tums, take atazanavir with food two hours before or one hour after. Monitoring is required when used with warfarin. Calcium channel blockers should be monitored. Reducing dose and frequency of rifabutin to 150 mg every other day or three times a week is recommended. Evotaz increases levels of fluticasone (found in Advair, Arnuity Ellipta, Breo Ellipta, Flonase, and Flovent); monitor for signs of Cushing’s syndrome (increased abdominal fat, fatty hump between the shoulders, rounded face, red/purple stretch marks, bone loss, increased appetite, possible high blood pressure, and sometimes diabetes). An alternative corticosteroid is recommended.

Erectile dysfunction drugs should not exceed 10 mg Cialis or 2.5 mg Levitra per 72 hours, or 25 mg Viagra per 48 hours. A lower dose of trazodone is recommended. Use with caution with bosentan, salmeterol, and immunosuppressants. Start metformin at lowest dose and titrate based on tolerability and clinical effect. Do not use with Olysio, Viekira Pak, or Zepatier. Can be used with Sovaldi, Daklinza (reduce Daklinza dose to 30 mg), or Harvoni (if TDF is not part of the HIV regimen). Monitor for tenofovir toxicities with Epclusa if TDF is part of the regimen. Tell your provider or pharmacist about all medications, herbals, and supplements you are taking or thinking of taking, prescribed or not, as there are other drug interactions which are not listed here.

Evotaz is an alternative PI for first-time therapy in DHHS HIV treatment guidelines, and is one of two PIs that are co-formulated with the booster cobicistat (the other is Prezcobix). Since most people who take Reyataz must use it with a PK enhancer such as cobicistat (Tybost) or ritonavir (Norvir), this formulation makes for greater convenience; one less pill, and one less co-pay. Tybost is not an HIV medication.

Similar to ritonavir, it is used to boost blood levels of other drugs. The two PK enhancers have a long list of drug interactions. Maintaining adequate hydration is important with Evotaz. Reyataz + Tybost + Epzicom is no longer included in the list of “Recommended Initial Regimens in Certain Clinical Situations” because it has disadvantages compared to other regimens in this category. In October 2019, the FDA approved a pediatric dose for Tybost (the brand name for cobicistat). The approval also allowed Tybost and Reyataz to be taken by pediatric patients weighing at least 77 pounds (35 kg). (Reyataz was already approved for pediatric use.) Although the Evotaz label was not changed to note this approval, it is presumed that pediatric patients weighing at least 77 pounds can take Evotaz.

The second dual PI coformulation with cobicistat, Evotaz is infrequently used because of its many drug interactions and side effects. (See Reyataz and Tybost.)

It can be used for treatment with one of the tenofovir-containing nuke backbones, but it is generally now prescribed mainly for people who have been on long-term atazanavir with good results who wish to maintain this regimen.

It is not recommended in pregnancy because of insufficient drug levels associated with cobicistat.

Evotaz consists of an HIV medication and a booster. It is not a full regimen on its own. The absorption of atazanavir can be affected by medications taken for heartburn, so you need to make your clinician aware if you take those. The cobicistat means drug-drug interactions with other medications are also possible. Evotaz can be used in both treatment-naïve and treatment-experienced patients.