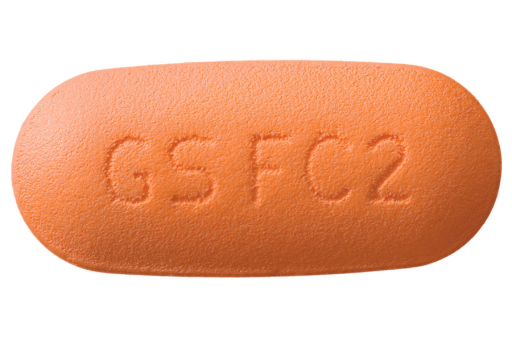 One tablet once daily, without regard to food. Tablet contains 600 mg abacavir and 300 mg lamivudine. Must be taken in combination with another antiretroviral(s) that do not contain the medications in this drug combination.

Approved for adults and children weighing 55 pounds (25 kg) or more. Take missed dose as soon as possible, unless it is closer to the time of your next dose. Do not double up on your next dose. According to the drug label, Epzicom is not recommended for people with decreased kidney function (creatinine clearance less than 50 mL/min) due to lamivudine component, or those with moderate or severe liver impairment due to abacavir component. This medication combination, however, is often used in reduced renal function below 50 mL/min due to relatively minimal risk of lamivudine accumulation and side effects. In addition, alternative doses may be obtained by using the individual components of this medication as needed.

Common side effects may include headache, nausea, fatigue, depressed mood, dizziness, diarrhea, rash, or insomnia. Of note is the hypersensitivity reaction (HSR, an allergic-like reaction) warning on abacavir (see Ziagen for details of symptoms). To minimize the risk for HSR, a simple blood test for HLA-B*5701 (a genetic marker) should be done before starting an HIV regimen containing abacavir to identify people at higher risk for this reaction. A negative HLA-B*5701 test does not mean you won’t have an HSR, but the risk is reduced to 1% or less from clinical studies. This test is covered by most insurance and also by LabCorp/ViiV (see company contact on co-pay chart). A warning card should be included with this medication when dispensed from the pharmacy.

Some large observational studies suggest abacavir may increase the risk of cardiovascular events, including myocardial infarction (MI, or heart attack), in people with risk factors such as smoking, diabetes, uncontrolled high blood pressure, older age, high cholesterol, family history of heart disease, and drug use. Other studies have found no increased risk. To date, no absolute consensus has been reached on the association with cardiac risk, although theoretical contributing mechanisms have been described. People who have high risk for heart disease should discuss risks with their provider, and they should be monitored more closely.

Prior to initiation, people should be tested for hepatitis B virus (HBV) infection. Severe exacerbations of hepatitis B have been reported in people co-infected with HBV who have discontinued Epzicom (due to elimination of the lamivudine component, which also treats HBV). Monitor liver enzymes closely in people co-infected with HBV and, if appropriate, initiation of anti-hepatitis B therapy may be warranted upon Epzicom discontinuation. Call your health care provider right away if you develop any of the following signs or symptoms of hepatitis: yellowing of the skin or whites of the eyes; dark or tea-colored urine; pale-colored bowel movements; nausea or vomiting; loss of appetite; or pain, aching, or tenderness on the right side below the ribs.

See the individual drugs contained in Epzicom—Epivir and Ziagen. It is important to take Epzicom only with other HIV medications recommended by your provider because Epzicom and its equivalent drugs are contained in other HIV medications: Atripla, Biktarvy, Cimduo, Combivir, Complera, Delstrigo, Descovy, Dovato, Emtriva, Epivir, Genvoya, Odefsey, Stribild, Symfi, Symfi Lo, Symtuza, Temixys, Triumeq, Trizivir, Truvada, or Ziagen; also, Epivir-HBV is used for the treatment of hepatitis B. Alcohol can increase levels of abacavir, and therefore can increase the possibility of side effects. Epzicom may be used with the hepatitis C drugs Epclusa, Harvoni, or Zepatier, depending on the third drug in the HIV regimen. Avoid use of sorbitol-containing medicines with lamivudine; there are many, such as acetaminophen liquid (Tylenol liquid and others). Tell your provider or pharmacist about all medications, herbals, and supplements you are taking or thinking of taking, prescribed or not, as there are other drug interactions not listed here.

Triumeq, a single-tablet regimen (STR) containing Tivicay and Epzicom, is a DHHS recommended initial therapy for most people (again, test for HLA-B*5701 first). Otherwise, the guidelines recommend Descovy or Truvada over Epzicom as the backbone NRTI component of an HIV drug combination for first-time therapy, with Epzicom listed as an alternative NRTI backbone. One of the reasons abacavir is a DHHS alternative drug is that the ACTG A5202 study found abacavir/lamivudine (Epzicom) was inferior to tenofovir/emtricitabine (Truvada) in getting people undetectable when their pre-treatment viral load was above 100,000 copies/mL. However, when combined with Tivicay (dolutegravir), Epzicom performed just as well as Truvada in people with high viral loads (over 100,000 copies/mL). Hence, Triumeq is the only abacavir-containing regimen recommended by DHHS as initial therapy for most HLA-B*5701-negative people. The lamivudine portion of Epzicom is also used to treat hepatitis B virus; see Epivir. Epzicom is recommended by DHHS as one of the preferred NRTI combination components of HIV treatment in pregnancy. Pregnant individuals can voluntarily enroll in the Antiretroviral Pregnancy Registry through their provider; go to apregistry.com.

Abacavir/3TC is generic and ViiV will discontinue brand name Epzicom tablets as of January 1, 2024. The main drawback for this combo is the need for screening to avoid abacavir hypersensitivity before beginning the drug (see Ziagen). Also, when used with efavirenz or atazanavir + ritonavir, viral load should be 100,000 copies/mL or below.

In early clinical trials, the most common side effects with abacavir were nausea, headache, malaise and fatigue, vomiting, and dreams/sleep disorders.

Epzicom (approved in 2004) is a fixed-dose combination (FDC) of two NRTIs—Epivir (lamivudine) and Ziagen (abacavir). Epzicom is recommended for most people starting therapy for the first time in combination with the INSTI Tivicay (dolutegravir). Epzicom cannot be taken by people with a certain gene that makes them susceptible to a life-threatening allergic reaction to abacavir (your doctor will test you for the gene before prescribing Epzicom). Epzicom should not be taken by people with hepatitis B virus (HBV). Some studies have found increased rates of heart disease among people taking the abacavir component of Epzicom. Both components of Epzicom share a resistance mutation (called M184V); so, while the Epzicom “backbone” is recommended for most people starting treatment for the first time, folks who have previously been on a regimen that contained Epivir (lamivudine), Ziagen (abacavir), or Emtriva (emtricitabine) should make sure their provider is aware of their treatment history.