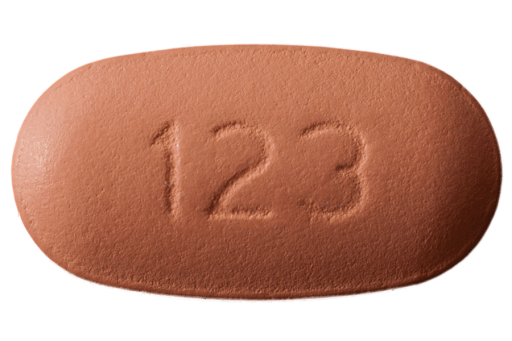 One tablet once daily on an empty stomach, preferably at bedtime (food can increase the risk of central nervous system, or CNS, side effects). Tablet contains 600 mg of the NNRTI efavirenz plus 200 mg emtricitabine and 300 mg tenofovir disoproxil fumarate (TDF).

For adults and children 12 years of age and older weighing at least 88 pounds (40 kg).

Similar, but not exact, medications are available (see Symfi and Symfi Lo).

Use with caution in individuals with depression or other psychiatric issues who are not receiving mental health care. A 2014 study reviewed four previously published AIDS Clinical Trials Group (ACTG) studies regarding efavirenz and suicidal ideation and re-emphasized an association between efavirenz and suicidality (reported suicidal ideation or attempted or completed suicide), and should be used with caution in people with severe or uncontrolled depression and/or a history of suicidality. It is recommended for anyone on a regimen containing efavirenz to be screened for depression and suicidality. Common side effects may include dizziness, drowsiness, abnormal or vivid dreams, difficulty concentrating, rash, diarrhea, nausea, fatigue, headache, and insomnia. These side effects may go away after a few weeks. TDF is associated with long-term decreases in bone mineral density (BMD); see Viread. Kidney function should be assessed before initiating treatment and throughout therapy as determined by a provider. Prior to initiation, people should be tested for hepatitis B virus (HBV). Severe exacerbations of HBV have been reported in people co-infected with HBV who have discontinued Atripla (due to elimination of the emtricitabine and TDF components, which also treat HBV). Monitor liver enzymes closely in people with co-infection. Initiation of HBV therapy may be warranted upon discontinuation of Atripla. Call your health care provider right away if you develop any of the following signs or symptoms of hepatitis: yellowing of the skin or whites of the eyes; dark or tea-colored urine; pale-colored bowel movements; nausea or vomiting; loss of appetite; or pain, aching, or tenderness on the right side below the ribs. Efavirenz has been associated with central nervous system (CNS) birth defects in non-human primates, and cases of neural tube defects have been reported after first trimester exposure in humans. A link between efavirenz and birth defects in humans has not been supported in meta-analyses. The recommendation is that women in their first trimester continue taking efavirenz as long as their viral load remains undetectable; however, efavirenz should only be used if the potential benefit outweighs the potential risk (as when other treatment options are not available). Because of the association with suicidality and neuropsychiatric effects, it is also recommended to screen for antenatal and postpartum depression in recently pregnant individuals with HIV who are taking a regimen containing efavirenz. Efavirenz can cause a false positive result for marijuana on certain drug tests. A more specific confirmatory test can be done.

Do not take with Cimduo or Temixys, Descovy, Emtriva, Epivir-HBV, Hepsera, Truvada, Vemlidy, or Viread, all used for the treatment of hepatitis B. Avoid taking with drugs that negatively affect the kidneys, including chronic use or high doses of anti-inflammatory drugs for pain such as Advil or Motrin (ibuprofen) and Aleve (naproxen). Atripla should not be taken with voriconazole, ergot derivatives, midazolam, pimozide, triazolam, bepridil, or St. John’s wort. Atripla should also not be taken with other medications that prolong QTc interval (a heart problem) or medications with a known risk for torsades de pointes. For people weighing at least 110 pounds (50 kg) and taking rifampin, it is recommended to give 200 mg of efavirenz in addition to Atripla (for a total efavirenz dose of 800 mg per day). May affect warfarin levels. Can decrease levels of buprenorphine and methadone—monitor for withdrawal. When taken with carbamazepine, phenobarbital, or phenytoin, periodic monitoring of anticonvulsant and efavirenz levels should be done or alternative anti-seizure drugs, such as levetiracetam, should be considered. Effectiveness of birth control pills may be decreased; consider using other contraceptive methods. Closer monitoring and dose adjustments may be required with posaconazole (avoid unless benefit outweighs potential risk) and itraconazole. Monitor effectiveness of clarithromycin or consider using azithromycin instead. Levels of immunosuppressants should be monitored when starting or stopping. Cardizem, Lipitor, Pravachol, and Zocor doses may need to be adjusted. Titrate dose of bupropion and sertraline based on clinical response. No dose adjustment of Atripla needed with Sovaldi. Use caution when administering Atripla with Harvoni, and monitor renal function closely due to possible increased tenofovir levels. Increase dose of Daklinza to 90 mg when used with Atripla. Atripla should not be taken with Epclusa or Zepatier. Not intended to be taken with other HIV medications, unless prescribed that way. Tell your provider or pharmacist about all medications, herbals, and supplements you are taking or thinking of taking, prescribed or not, as there are other drug interactions that are not listed here.

Check with your provider or pharmacist first before stopping Atripla, so that you avoid the rapid development of HIV resistance to it. A genetic trait affecting drug metabolism of efavirenz, leading to a higher rate of side effects, occurs more in African Americans. For individuals with HIV-2, more commonly found outside the U.S., an NNRTI such as efavirenz would not be recommended as HIV-2 is inherently resistant to NNRTIs. Pregnant individuals can voluntarily enroll in the Antiretroviral Pregnancy Registry through their provider; go to apregistry.comhttps://apregistry.com.

Atripla revolutionized HIV treatment in 2006 when it became the first once-daily STR, but it has not been recommended for initial therapy for most people in the U.S. for a number of years, largely due to its many side effects. Central nervous system side effects include depression, dizziness, sleepiness, abnormal dreams, headache, and most notably, suicidality. Others include rash, elevation of LDL cholesterol, and EKG changes that could be associated with serious heart rhythm abnormalities (QTc prolongation). Efavirenz also has many drug-drug interactions that complicate its use. The Atripla-lookalike generics Symfi and Symfi Lo both use 3TC instead of FTC. It’s unfortunate that HIV generics often only emerge after the usefulness of the drug has passed. This speaks to the complicated and profit-driven game that is drug development in the U.S. but also to the extremely rapid pace of drug advances in HIV treatment. See Descovy and Truvada.

Given newer options, Atripla (approved in 2006) has two strikes against it: efavirenz and TDF. Efavirenz breathed new life into the NNRTI class when it was on life support in the wake of bad pharmacology (delavirdine) and bad marketing (nevirapine). But it causes serious neurologic side effects such as nightmares, depression, and suicidal ideation that can make it difficult to tolerate. As for TDF, it is effective and tolerable with a great resistance profile. Unfortunately, there are worrisome bone and kidney side effects. Given other available options, it’s hard to imagine why any provider today would recommend Atripla for any person requiring HIV treatment.